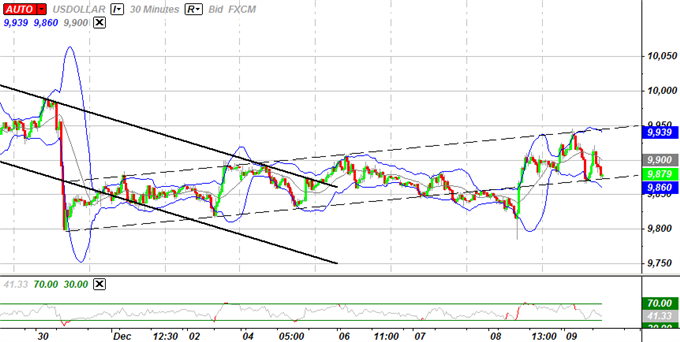 The Dow Jones-FXCM U.S. Dollar Index (Ticker: USDollar) is 0.15 percent lower from the open after moving 96 percent of its average true range, but we should see the greenback regain its footing as it maintains the upward trending chancel from the beginning of December. As the 30-minute relative strength index bounces back from a low of 33, we should see the reserve currency track higher throughout the North American session, and the index looks poised to push higher in the days ahead as it appears to have carved out a higher low this week. However, as market participation tends to thin ahead of the weekend, the USD looks poised to consolidate for the remainder of the day, and we should see the greenback extended the rebound from 3,786 next week as the heightening risk for contagion continues to bear down on investor confidence. 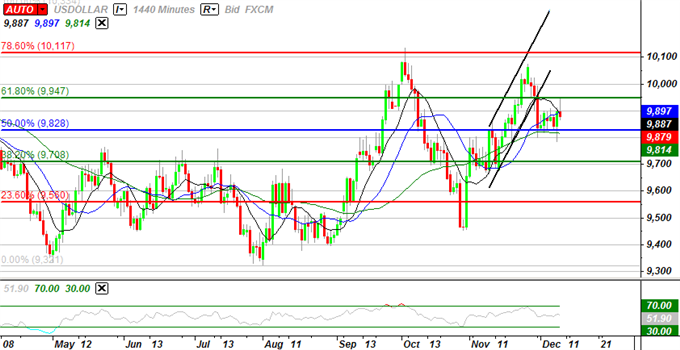 As the USD struggles to push back above the 61.8 percent Fibonacci retracement around 9,947, the sideways price action may get carried into the following week, but we still expect to see a higher high in the dollar index as the outlook for 2012 turns increasingly bleak. The new fiscal pact drawn up at the EU Summit helped to prop up market sentiment, but the increased efforts to address the sovereign debt crisis raises the risk of seeing a major economic downturn in the euro-area as the governments operating under the fixed-exchange rate system are expected to further scale back fiscal policy. In turn, we may see the European periphery become increasingly reliant on monetary support, and the European Central Bank may face increased pressures to expand its nonstandard measures as the region faces record-high financing costs. However, as ECB President Mario Draghi continues to target the benchmark interest rate, we may see the Governing Council continue to move away from its asset purchase program, and we may see the central bank head push borrowing costs below 1.00 percent in order to stem the downside risks for growth and inflation. As the fundamental outlook for the euro-area turns increasingly bleak, market sentiment may deteriorate in the week ahead, and we may see a flight to safety as European policy makers struggle to restore investor confidence.

The greenback weakened against all of its major counterparts, led by the 0.27 percent in the Australian dollar, but the rebound in the high-yielding currency is likely to be short-lived as the economic docket for the following week is expected to instill a weakened outlook for the isle-nation. A slowdown in private sector activity is likely to spark a bearish reaction in the AUD/USD, and we should see the selloff from 1.0379 gather pace in the days ahead as the pair carves out a lower top in December. As the exchange rate struggles to hold above the 23.6 percent Fib from the 2010 low to the 2011 high around 1.0350-70, we should see the pair give back the rebound from the end of November, and the aussie-dollar may come up against the 38.2 percent Fib around 0.9920-50 to test for near-term support.