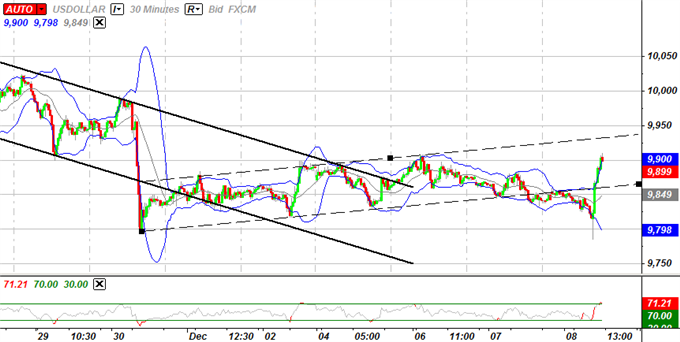 The Dow Jones-FXCM U.S. Dollar Index (Ticker: USDollar) is 0.55 percent higher from the open after moving 150 percent of its average true range, and the sharp rebound from 9,786 may gather pace as the USD trades back within the upward trending channel from earlier this week. However, as the 30-minute relative strength index pushes into oversold territory, we could see a short-term correction unfold going into the end of the week, and the index may struggle to hold above 9,900 as market participants expect European policy makers to step up their efforts in addressing the sovereign debt crisis. As the EU Summit takes center stage, a positive development could spark a rebound in risk sentiment, but we may see the group struggle to meet on common ground as France and Germany push to amend the treaty. As the USD appears to be appears to be carving out a higher low this week, the near-term outlook for the reserve currency remains bullish, and we may see market sentiment deteriorate further should the EU fail to draw up a credible solution to stem the risk for contagion. As German Chancellor Angela Merkel and French President Nicolas Sarkozy look to change the treaty, we may see the two lay the groundwork for an euro-area exit mechanism, and the threat of a breakup is likely to spark a flight to safety as it casts a dour outlook for the global landscape. In turn, we should see the greenback continue to retrace the selloff from 10,074, and the index may make another at the 78.6 percent Fibonacci retracement (10,117) as the reserve currency looks poised to mark a higher high.

All four components weakened against the USD, led by a 1.07 percent decline in the Australian dollar, and AUD/USD appears to have put in a lower top following the failed run at 1.0400. As the Reserve Bank of Australia shows an increased willingness to expand monetary policy further, the fundamental outlook for the aussie points to more declines, and the exchange rate may give back the rebound from the end of November as market participants expect to see lower borrowing costs in 2012. According to Credit Suisse overnight index swaps, investors see the RBA lowering the benchmark interest rate by more than 100bp over the next 12-months, and expectations for a string of rate cuts is likely to drag the exchange rate lower as the fundamental outlook for the high-yielding currency deteriorates. In turn, the sharp reversal from 1.0379 should gather pace over the coming days, and we may see the AUD/USD come up against the 38.2% Fib retracement from the 2010 low to the 2011 high around 0.9900-20 as the shift away from risk-taking behavior gathers pace.