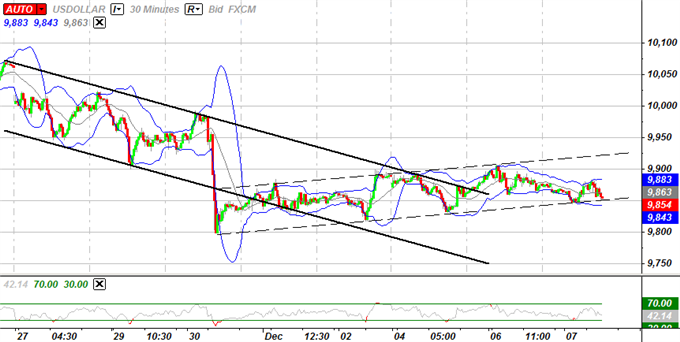 The Dow Jones-FXCM U.S. Dollar Index (Ticker: USDollar) is 0.22 percent lower from the open after moving only 49 percent of its average true range, and we may see the greenback trade within a tight range ahead of the EU Summit as market participants expect to see a major agreement being reached over the coming days. As market sentiment firms up, we may see the USD give back the advance from earlier this month, but the greenback may creep higher over the next 24-hours as it appears to be trading within a narrow upward trending channel. As the index carves out a higher low this week, we should see the bullish pattern hold, and rebound from 9,845 looks poised to gather pace going into the end of the week as price action breaks out of the downward trending channel carried over from November. 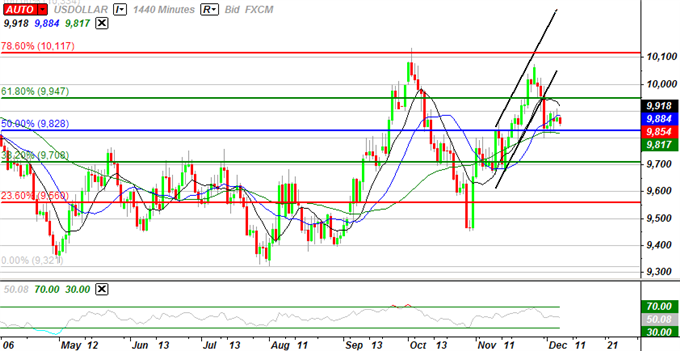 As the USD continues to hold above the 50.0 Fibonacci retracement around 9,828, the greenback remains primed to retrace the selloff from 10,074, and we still expect to see another run at the 78.6% (10,117) as we look for a higher high. Beyond the EU Summit, the European Central Bank interest rate decision is likely to shake up the foreign exchange market as the Governing Council is widely expected to lower the benchmark interest rate by another 25bp in December. However, as the ECB considers a two-year loan for commercial banks, it seems as though the Governing Council also expand its nonstandard measures tomorrow, and we should see President Mario Draghi carry the easing cycle into the following year as the fundamental outlook for the euro-area turns bleak. In turn, dovish comments from the central bank head could drag on market sentiment, and the ECB may turn increasingly cautious towards the region as the region faces an increased risk of a deep economic downturn in 2012.

Three of the four components rallied against the greenback on Wednesday, led by the 0.53 percent rally in the British Pound, but the recent strength in Cable is likely to be short-lived as the developments coming out of the U.K. highlight a weakened outlook for the region. Nevertheless, the Bank of England is widely expected to keep the benchmark interest rate at 0.50 percent while maintaining its asset purchase program at GBP 275B, and market participants may show a fairly muted reaction to the rate decision as we expect the central bank to refrain from releasing a policy statement. In turn, we will have to look towards the BoE minutes, which are due out on December 21, but the statement is likely to highlight an increased willingness to expand monetary policy further as Britain teeters on the brink of another recession. As we see the BoE carrying its easing cycle into 2012, the fundamental outlook for the British Pound remains pretty bearish, and we may see the GBP/USD threaten the rebound from 1.5273 in the coming days as the pair appears to have put a lower top in place.