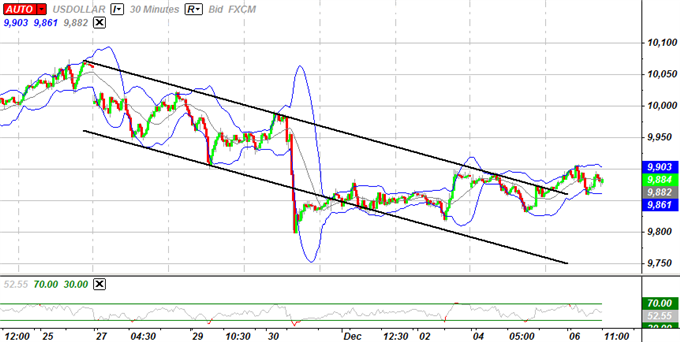 The Dow Jones-FXCM U.S. Dollar Index (Ticker: USDollar) remains 0.26 percent higher from the open after moving 58 percent of its average true range, and the rebound from 9,799 may gather pace over the near-term as price action breaks out of the downward trending channel carried over from the previous month. In turn, we should see the USD continue to retrace the selloff from 10,074, and the greenback may trade higher over the remainder of the year as the outlook for 2012 turns increasingly bleak. However, as optimism surrounding the EU Summit props up market sentiment, we may see the index consolidate going into the middle of the week, and the developments coming out of Europe is likely to heavily influence the foreign exchange market as the sovereign debt crisis remains in focus. 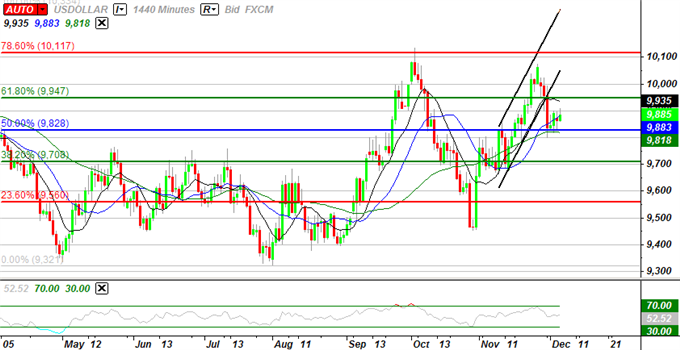 The USD appears to have carved out a higher low coming into December and the short-term rebound could pave the way for another run at the 78.6 percent Fibonacci retracement around 10,117 should the EU Summit fail to restore investor confidence. Indeed, the push by France and Germany to revise the treaty has spurred hopes of seeing a major decision being reached over the coming days, but the euphoria surrounding the meeting may quickly taper off should European policy makers struggle to meet on common ground. At the same time, we may see the European Central Bank turn increasingly cautious towards the economy as President Mario Draghi is widely expected to lower the benchmark interest rate by another 25bp, and the Governing Council may show an increased willingness to carry its easing cycle into the following year as the region braces for a ‘mild recession.’ However, the slowdown in global trade paired with the ongoing turmoil in the financial system could ultimately lead to a deep-than-expected downturn in economic activity, and the central bank may have little choice but to shore up the real economy throughout 2012 as it aims to encourage a sustainable recovery.

Three of the four components weakened against the greenback, led by a 0.50 percent decline in the Australian dollar, and the high-yielding currency is likely to face additional headwinds over the near-term as the central bank talks up speculation for additional monetary support. Indeed, the Reserve Bank of Australian lowered the benchmark interest rate by another 25bp in December and we should see the central bank carry its easing cycle into the following year as Governor Glenn Steven casts a weakened outlook for the region. As the RBA highlights the slowdown in China – Australia’s largest trading partner – the protracted recovery in the isle-nation is likely to bring about more monetary stimulus, and the recent decline in the AUD/USD is likely to gather pace over the near-term as interest rate expectations falter. According to Credit Suisse overnight index swaps, market participants still see borrowing costs falling by nearly 150bp over the next 12-months, and the aussie-dollar looks as though it has carved out a near-term top as price action struggles to push back above the 100-Day SMA (1.0302). In turn, the AUD/USD should give back the rebound from the end of November, and we may see the pair make another run at the 38.2 Fib from the 2010 low to the 2011 high around 0.9550-60 as the fundamental outlook for Australia turns increasingly bleak.