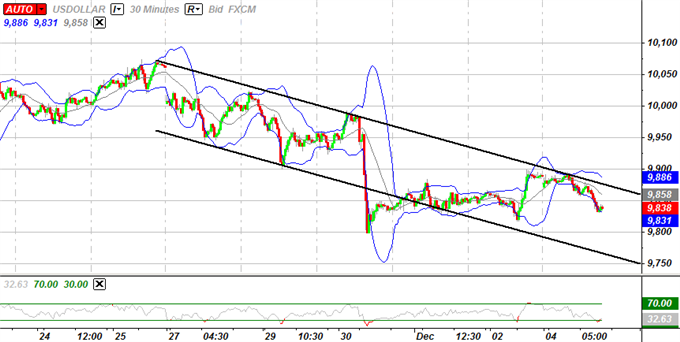 The Dow Jones-FXCM U.S. Dollar Index (Ticker: USDollar) is 0.52 percent lower from the open after moving 75 percent of its average true range, and the greenback should weaken further over the near-term as it fails to break out of the downward trending channel carried over from November. As market sentiment improves, the rise in risk appetite is likely to dampen the appeal of the reserve currency, but we may see a short-term correction pan out over the next 24-hours of trading as the 30-minute Relative Strength Index bounces back from oversold territory. In turn, we may see a small bounce in the index before it continues to track lower, and the optimism surrounding the EU Summit may continue to prop up market sentiment as European policy makers renew their efforts to address the sovereign debt crisis. 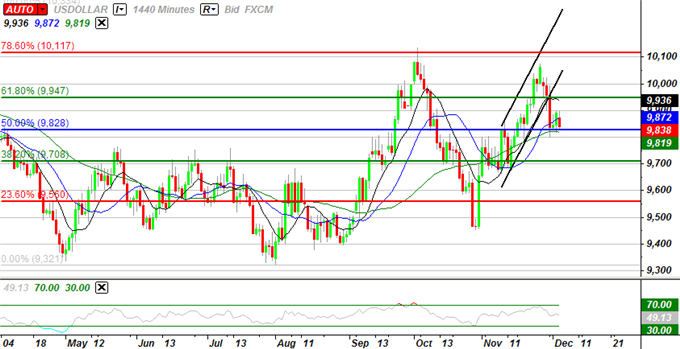 Indeed, market sentiment picked up as German Chancellor Angela Merkel and French President Nicolas Sarkozy pushed for a ‘new treaty,’ while Italian Prime Minister Mario Monti unveiled a EUR 30B package to boost growth while cutting the budget deficit. As market participants closely watch the developments coming out of the euro-area, we may see the rise in risk-taking behavior gather pace should Italy’s government pass the new measures later today, but the European Central Bank interest rate decision could instill a bearish outlook for the single currency as the Governing Council is widely expected to lower borrowing costs by another 25bp this week. As the ECB moves away from its nonstandard measures, President Mario Draghi may continue to target the interest rate, and the central bank head may show an increased willingness to carry its easing cycle into the following year as the region braces for a ‘mild recession.’ As a result, dovish comments from the ECB may bear down on trader sentiment, and we may see the USD firm up should it hold above the 50.0 percent Fib around 9,828. As the greenback appears to be carving out a higher lower on the daily chart, we may see the dollar coil up for another move to the upside, and we may see the index make a higher high should the rebound from 9,799, the 11/30 low, gather pace.

All four components advanced against the greenback, led by an 0.80 percent advance in the Australian dollar, but the high-yielding currency may struggle to hold its ground over the next 24-hours of trading as market participants see the central bank taking additional steps to shore up the isle-nation. Indeed, the Reserve Bank of Australia is widely expected to lower the cash rate by another 25bp in December, but the central bank may show an increased willingness to further expand monetary policy as the outlook for global growth deteriorates. According to Credit Suisse overnight index swaps, market participants see borrowing costs falling by more than 125bp over the next 12-months, and we may see a sharp selloff in the exchange rate should the RBA talk up expectations for additional easing. As the AUD/USD struggles to hold above the 100-Day SMA at 1.0307, the pair may have carved out a lower high in December, and the high-yielding currency may give back the advance from earlier this month as interest rate expectations falter.