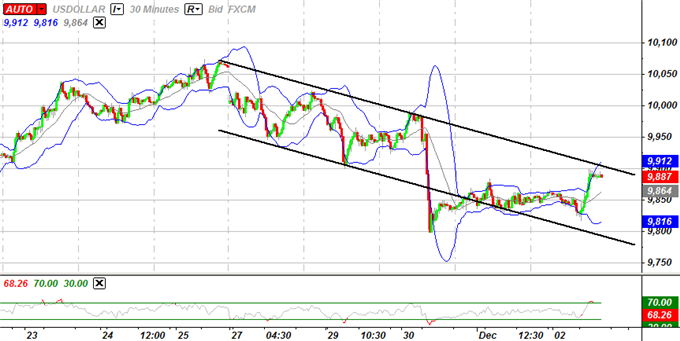 The Dow Jones-FXCM U.S. Dollar Index (Ticker: USDollar) remains 0.34 percent higher from the open after moving 90 percent of its average true range, and we may see the greenback consolidate in the days ahead as the 30-minute relative strength index falls back from a high of 73. As the oscillator turns over, we may see the bearish pattern continue to pan out in the week ahead, and the USD may give back the previous month’s advance as it trades back within the downward trending channel. In turn, we may see the greenback work its way back towards 9,800 next week, but a shift in risk sentiment could prop up the reserve currency as it continues to benefit from safe-haven flows. 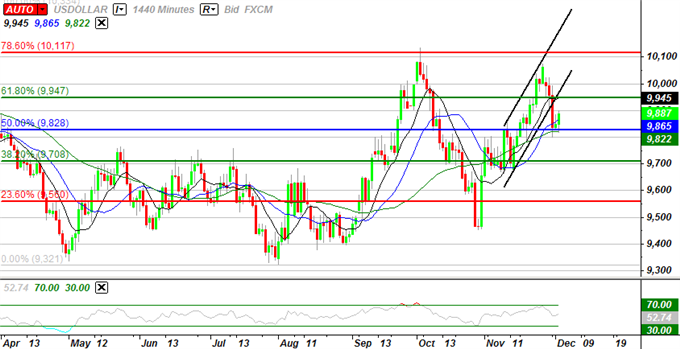 Indeed, the economic docket for the following promises some major developments for the currency market, but the European Central Bank interest rate decision certainly highlights one of the top events for the following week as market participants see the Governing Council taking additional steps to shore up the ailing economy. According to Credit Suisse overnight index swaps, investors are pricing an 83 percent chance for a 25bp rate on December 8, and we may see the ECB carry its easing cycle into the following year as the region braces for a ‘mild recession.’ However, we may see a growing rift within the central bank as its asset purchase program comes under increased scrutiny, and President Mario Draghi may continue to move away from the nonstandard measures as the committee carries out its one and only mandate to ensure price stability. In turn, much will be expected from the EU Summit in Brussels, but we may see European policy makers attempt to buy more time should they struggle to meet on common ground. As the fundamental outlook for the euro-area turns increasingly bleak, a flight to safety should increase the appeal of the greenback, and the index may continue to retrace the pullback from 10,074 as investor confidence falters.

All four components weakened against the greenback, led by a 0.58 percent decline in the British Pound, and the sterling is likely to face additional headwinds over the following as the economic docket is expected to highlight a weakening outlook for the U.K. At the same time, the Bank of England is scheduled to meet next week to announce its interest rate decision, but market participants may overlook the meeting as the central bank is widely expected to maintain its current policy in December. Should the BoE keep the benchmark interest rate at 0.50% while maintain its asset purchase program at GBP 275B, we are likely to see the Monetary Policy Committee refrain from releasing a policy statement, and market participants will have to look forward to the policy meeting minutes due out on December 21, which could highlight an increased willingness to expand monetary policy further. In turn, we may see the GBP/USD trade heavy in the days ahead, and the pair may threaten the rebound from 1.5273 as market participants see the BoE taking additional steps to ward off a double-dip recession.