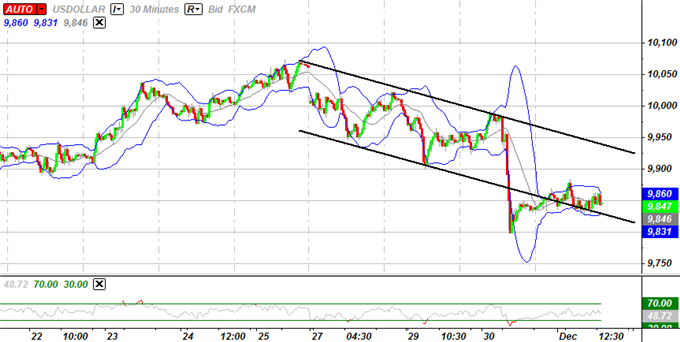 USD To Hold Steady Ahead Of NFPs, Aussie Weakness Ahead

The Dow Jones-FXCM U.S. Dollar Index (Ticker: USDollar) remains 0.10 percent higher from the open after moving 64 percent of its average true range, and it seems as though we will see the greenback consolidate throughout the North American trade as price action holds along the 20-period moving average. However, as the USD trades back within the downward trending channel carried over from the previous month, we may see the index track lower in December, and the reserve currency may continue to trade heavy in 2012 should the rise in risk-taking behavior gather pace. Nevertheless, as the slew of positive data coming out of the world’s largest economy limits the Fed’s scope to ease monetary policy further, easing bets for another large-scale asset purchase program could prop up the dollar next year, and we may see central bank chairman Ben Bernanke soften his dovish tone for monetary policy as the economic recovery gradually gathers pace. 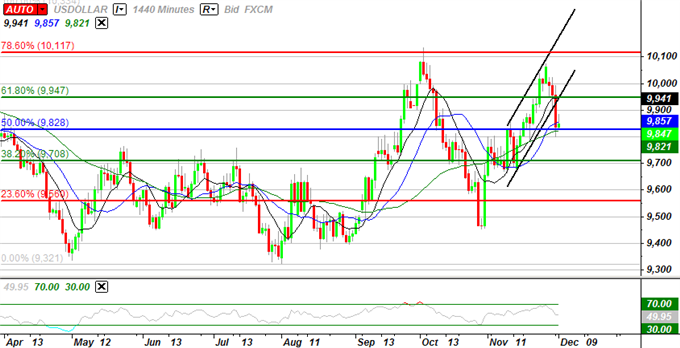 As the USD holds above the 50.0 percent Fibonacci retracement around 9,828, and it seems as though the greenback may move sideways over the near-term as it breaks out of the upward trend from November. However, as the moving average crossovers point to higher prices, the greenback could be carving out a higher low, and the dollar may continue to retrace the sharp reversal from 10,074 as the fundamental outlook for the world’s largest economy improves. Indeed, U.S. Non-Farm Payrolls are projected to increase another 125K in November after advancing 80K in the previous month, and the pickup in job growth could increase the appeal of the greenback as the development dampens the likelihood for QE3. In turn, we may see the rebound from 9,799 gather pace going into the end of the week, and the reserve currency may finally mark a higher high as growth prospects pickup.

Three of the four components weakened against the greenback on Thursday, led by a 0.46 percent decline in the Australian dollar, and the high-yielding currency may face additional headwinds in the coming days as market participants see the central bank taking additional steps to shore up the isle-nation. According to Credit Suisse overnight index swaps, investors have fully priced a 25bp rate for the rate decision next week, while borrowing costs are anticipated to fall by nearly 150bp over the next 12-months. As interest rate expectations remain weak, speculation for additional monetary support continues to cast a bearish outlook for the AUD/USD, and the recent rebound in the exchange rate looks to be tapering off ahead of the RBA as it fails to test of the 23.6% Fib retracement from the 2010 low to the 2011 high around 1.0350-60. As a result, we may see the aussie-dollar further retrace the rally from the end of November, and the pair may ultimately threaten the rebound from 0.9390 should central bank Governor Glenn Stevens talk up speculation for more easing.