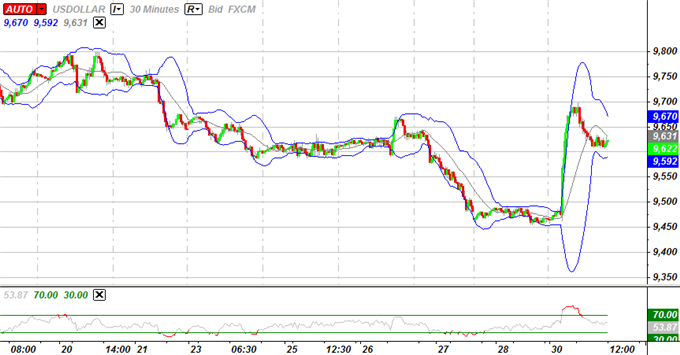 USD To Consolidate Ahead Of FOMC, Yen Weakness To Be Short-Lived

The Dow Jones-FXCM U.S. Dollar Index (Ticker: USDollar) is 1.62 percent higher from the open after moving 237 percent of its average true range, and the reserve currency may continue to retrace the sharp decline from earlier this month as market sentiment falters. However, the pullback from 9,698 may keep the USD confined ahead of the FOMC interest rate decision on tap for later this week, and the greenback may hold steady during the first-half of the week as market participants weigh the outlook for monetary policy. As the 30-minute relative strength index falls back from a high of 91, the reserve currency looks poised to consolidate throughout the remainder of the day, but the USD may face additional headwinds this week should the Fed talk up speculation for additional monetary support. 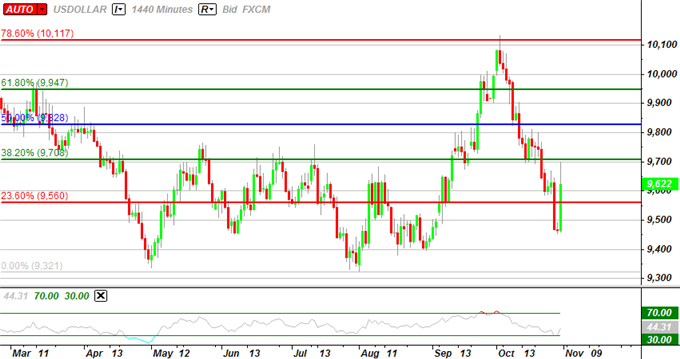 As the USD fails to push back above the 38.2 percent Fibonacci retracement around 9,708, the bullish sentiment underlying the reserve currency may taper off going into the middle of the week, and the greenback may struggle to hold its ground should the Fed keep the door open to conduct another round of quantitative easing. However, as the recent developments coming out of the world’s largest economy heighten the outlook for growth and inflation, we may see Fed Chairman Ben Bernanke soften his dovish tone for monetary policy, and the committee may endorse a wait-and-see approach for the remainder of the year as central bank officials see a stronger recovery ahead. As speculation for QE 3 deteriorates, the development should help to prop up the greenback, and the rebound from 9,454 may turn into a larger correction as the fundamental outlook for the U.S. improves.

All four components weakened against the greenback, led by a 2.79 percent decline in the Yen, and the low-yielding currency may face additional headwinds over the near-term as Japanese policy makers step up their efforts to stabilize the exchange rate. Indeed, Japan’s Ministry of Finance intervened in the foreign exchange market, which was confirmed by Fin. Min. Jun Azumi, and the government may take additional steps to stem the marked appreciation in the local currency as it curbs the prospects for an export-led recovery. However, the market reaction to the Yen intervention may be short-livedas the USD/JPY pares the sharp rally to 79.52, and we may see the Yen trade higher in the days ahead as investors scale back their appetite for risk. Nevertheless, it seems as though retail traders are still looking for higher prices in the dollar-yen as the DailyFX Speculative Sentiment index currently stands at 4.51, and the contrarian indicator continues to highlight a downside risk for the USD/JPY as the retail FX crowd tries to fade the downward momentum in the exchange rate.