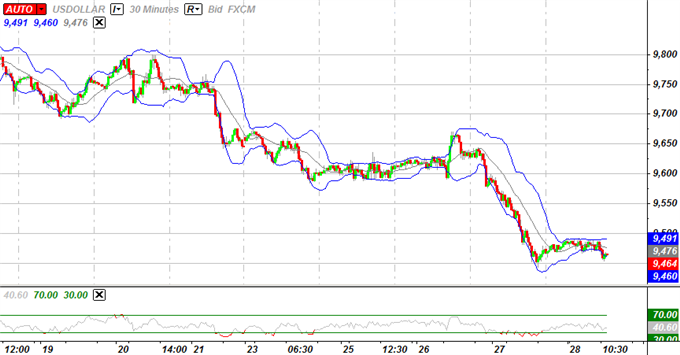 The Dow Jones-FXCM U.S. Dollar Index (Ticker: USDollar) is 0.05 percent lower from the open after moving 41 percent of its average true range, and the greenback may consolidate throughout the remainder of the day as market participation tends to taper off ahead of the weekend. However, the narrowing Bollinger Bands highlights a risk of seeing a breakout in the USD, and we may see a sharp rebound in the beginning of the following week as the gauge appears to be finding near-term support around 9,450. As the greenback remains oversold, the small rebound may turn into a larger correction, and the reserve currency may work its way towards former support around 9,600, which could turn into new resistance. 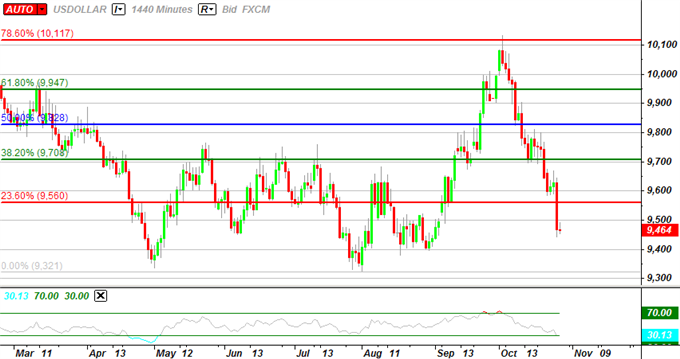 As the relative strength index sits at 30, we need a rebound in the oscillator to confirm a larger correction in the USD, but the greenback may consolidate ahead of the FOMC interest rate decision on November 2 as market participants weigh the prospects for future policy. As the recent developments coming out of the world’s largest economy encourage an improved outlook for future growth, the committee may soften its dovish tone for monetary policy, and the central bank may bring its easing cycle to an end as Fed officials expect the recovery to gather pace over the coming months. However, the committee may keep the door open to expand its balance sheet further given the ongoing turmoil within the world financial system, and Fed Chairman Ben Bernanke may talk up speculation for additional monetary support as the fundamental outlook for the global economy remains clouded with high uncertainty.

Two of the four components pushed higher on Friday, led by a 0.29 percent rally in the Japanese Yen, but the recent appreciation in the low-yielding currency increases the threat of seeing a currency intervention as it dampens the prospects for an export-led recovery. Indeed, Japan’s Finance Minister, Jun Azumi, pledged to take ‘bold’ action against the local currency as the USD/JPY slipped to a fresh record low of 75.65 earlier this week, but we may see the Bank of Japan continue to sit on the sidelines as it looks for alternative ways to weaken the Yen. As the BoJ expands its asset purchase program by another JPY 5 trillion, it seems as though the central bank will resort to easing monetary policy further rather than directly intervening in the foreign exchange market, but the Yen may continue to appreciate against its major counterparts as market participants diversify away from the greenback.