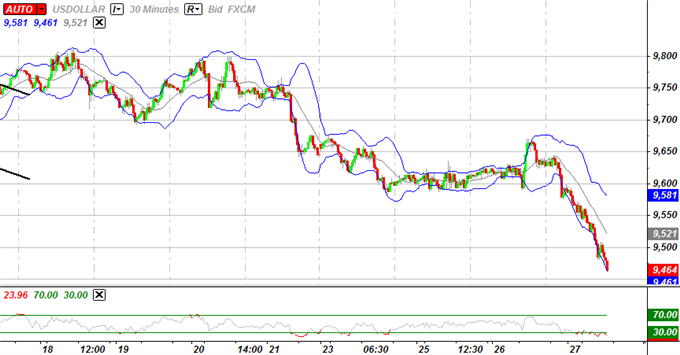 The Dow Jones-FXCM U.S. Dollar Index (Ticker: USDollar) is 1.72 percent lower from the open after moving 185 percent of its average true range, and the greenback looks poised for a rebound as the 30-minute relative strength index bounces back from a low of 22. In turn, we may see the USD work its way towards the upper Bollinger Band around 9,583 heading into Friday, but the reserve currency may face additional headwinds over the remainder of the week should the rise in risk sentiment gather pace. Accordingly, the USD may extend the sharp reversal from 10,134 and the index may approach the 9,400 level as it searches for support. 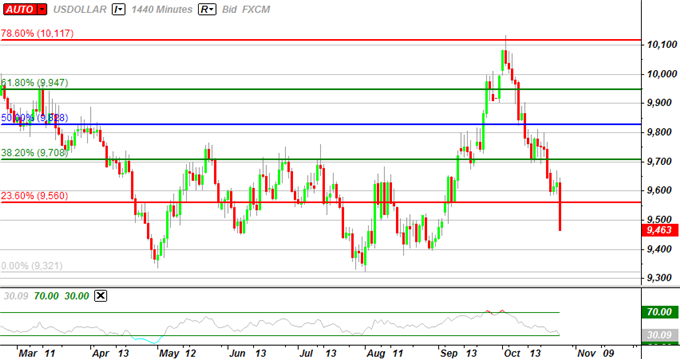 As the USD fails to find support around the 23.6 percent Fibonacci retracement (9,560), the dollar may threaten the rebound from 9,321, but we may see a large correction pan out in the days ahead as long as the RSI holds above 30. However, a rebound in the greenback could be capped by the 38.2 percent Fib around 9,708, and we may see the USD face range-bound price action in the following month as market participants weigh the outlook for monetary policy. As the advance 3Q GDP report encourages an improved outlook for the world’s largest economy, the Federal Reserve may talk down speculation for another round of quantitative easing, and the central bank may carry its current policy into 2012 as growth and inflation picks up. However, the recent developments may spur an increased rift within the FOMC as some Fed officials maintain a cautious outlook for the region, and members of the committee may call for additional monetary support in an effort to encourage a sustainable recovery.

All four components advance against the greenback on Thursday, led by a 2.96 percent advance in the Australian dollar, and the high-yielding currency may make a run at the September high (1.0763) as it benefits from the rise in risk. As the relative strength index approaches overbought territory, it seems as though we will get a pullback over the next 24-hours of trading, but a push above 70 could extend the rebound from 0.9390 as market sentiment improves. However, the slowing recovery in Australia instills a bearish outlook for the high-yielding currency and the sharp rally in the aussie may be short-lived as market participants see the Reserve Bank of Australia scaling back the benchmark interest rate from 4.75 percent. According to Credit Suisse overnight index swaps, market participants are pricing an 89 percent chance for a 25bp rate cut next week, while borrowing costs are anticipated to fall by more than 100bp over the next 12-months. As interest rate expectations deteriorate, the rally to 1.0713 may taper off heading into the following week, and the high-yielding currency may trade heavy in the following month as we expect the RBA to sound increasingly dovish in the week ahead.