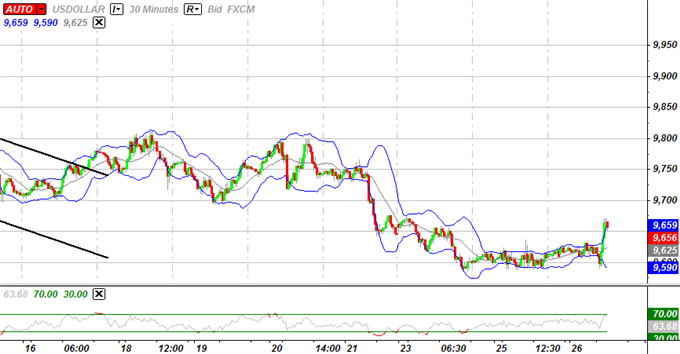 The Dow Jones-FXCM U.S. Dollar Index (Ticker: USDollar) is 0.45 percent higher on the day after moving 89 percent of its average true range, and the greenback may continue to retrace the sharp decline from earlier this month as investor confidence falters. As the USD carves out a bottom around 9,600, the gauge looks poised to work its way back towards the previous week’s highs around 9,800, and the reserve currency may extend the rally from the end of August as fears surrounding the global economy bears down on market sentiment. As optimism surrounding the EU Summit deteriorates, the shift away from risk-taking behavior should gather pace in the days ahead, but there could be a small correction in the greenback as the 30-minute relative strength index approaches overbought territory. In turn, we may see the index may consolidate before it continues to trade higher, and we expect the bullish momentum underling the USD to gather pace as the fundamental outlook for the world economy turns increasingly bleak. 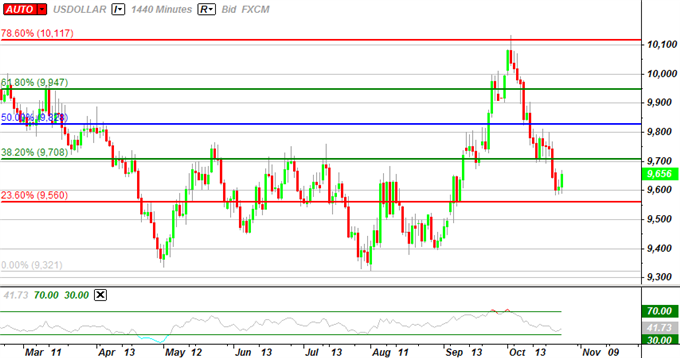 In light of the recent developments, we may see the USD make a run at the 38.2 percent Fibonacci retracement around 9,708 over the next 24-hours of trading, and fading hopes of addressing the European debt crisis once and for all is likely to spur increased demands for the greenback as market participants scale back their appetite for risk. However, the advanced 3Q GDP report for the world’s largest economy may prop up investor confidence as its expect to reinforce an improved outlook for future growth, and a strong growth figure could spur a shift in market sentiment as the U.S. averts a double-dip recession. As economic activity accelerates, the Fed may talk down speculation for another round on quantitative easing, and the central bank may look to conclude its easing cycle as policy makers expect to see a faster pace of growth over the coming months. In turn, fundamentals may play a greater role in driving price action for the USD, and FOMC may float the idea of normalizing monetary policy in 2012 as growth and inflation pick up.

Three of the four components struggled to holds its ground on Wednesday, with the Australian dollar falling 0.69 percent on the day, and the high-yielding currency may continue to give back the rally from earlier this month as the fundamental outlook for the isle-nation deteriorates. Easing price pressures in Australia may prompt the central bank to scale back the rate hikes from back in 2010, and the Reserve Bank of Australia may revert back to an easing cycle as the region faces a slowing recovery. According to Credit Suisse overnight index swaps, market participants still see borrowing costs falling by nearly 125bp over the next 12-months, and speculation for a rate cut may gather pace over the near-term as central bank Governor Glenn Stevens continues to soften his hawkish tone for monetary policy. As interest rate expectations deteriorate, the pullback from 1.0499 may turn into a larger trend, and the exchange rate may threaten the rebound from 0.9390 as the par carves out a lower top in October.