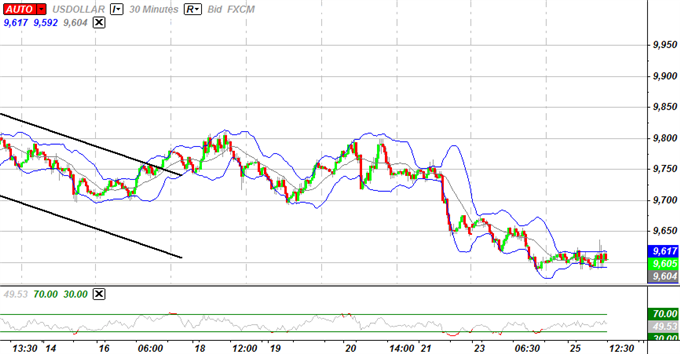 The Dow Jones-FXCM U.S. Dollar Index (Ticker: USDollar) remains 0.03 percent higher from the open after moving 55 percent of its average true range, and the greenback may continue to recoup the losses from earlier this month as it appears to be carving out a bottom around 9,600. In turn, we may see the gauge bounce back towards the previous week’s highs around 9,800, but hopes surrounding the EU Summit may help to prop up market sentiment as European policy makers step up their efforts to address the sovereign debt crisis. Should we see positive developments coming out of the euro-area, a rise in risk sentiment would sap demands for the reserve currency, and the greenback may trade heavy over the remainder of the week as investor confidence improves. At the same time, we may see European policy move in their own interest, and optimism surrounding the EU Summit may deteriorate should the group struggle to meet on common ground. 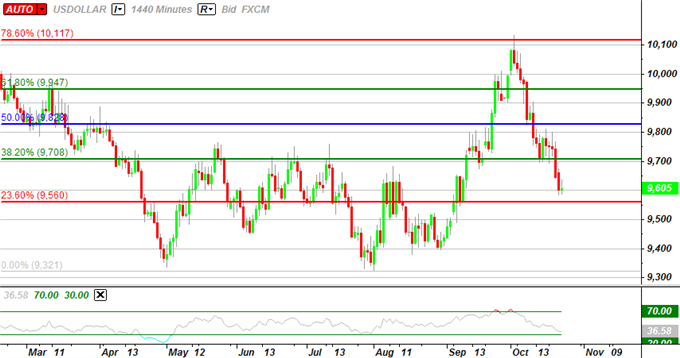 As risk sentiment wanes, the rebound in the USD should gather pace throughout the North American trade, and the greenback may continue to push higher over the near-term as the uncertainties surrounding the global economy weighs on investor confidence. As the greenback holds above the 23.6 percent Fibonacci retracement around 9,560, we may see the gauge extend the advance from the previous month, but the reserve currency may consolidate over the next 24-hours of trading as it holds within the previous day’s range. The outcome of the EU Summit is likely to heavily influence the currency market over the remainder of the week as European policy makers attempt to once and for all address the debt crisis, but expectations for a quick fix are likely to falter as the EU looks towards the European Central Bank to balance the risks for the region. In turn, the developments coming out of the meeting may fall short of market expectations, and the flight to safety may gather pace as the fundamental outlook for the euro-area turns increasingly bleak.

Three of the four components weakened against the greenback, led by a 0.31 percent decline in the Australian dollar, while the Japanese Yen advanced across the board, with the USD/JPY slipping to a fresh record-low of 75.73. Indeed, the ongoing appreciation in the low-yielding currency heightens the risk of seeing a Yen intervention, and retail traders are still trying to catch the bottom the dollar-yen as the DailyFX Speculation Sentiment index currently stands at 14.72. As a result, the Bank of Japan may face increased pressures to intervene in the currency market, but the central bank may look at alternative ways to shield the economy as its previous efforts to stabilize the exchange rate failed to have the desired effect. It seems as though we will see the BoJ continue to expand its nonstandard measures to dampen the appeal of the Yen, but the low-yielding currency may appreciate further over the near-term as the shift away from risk-taking behavior gathers pace.