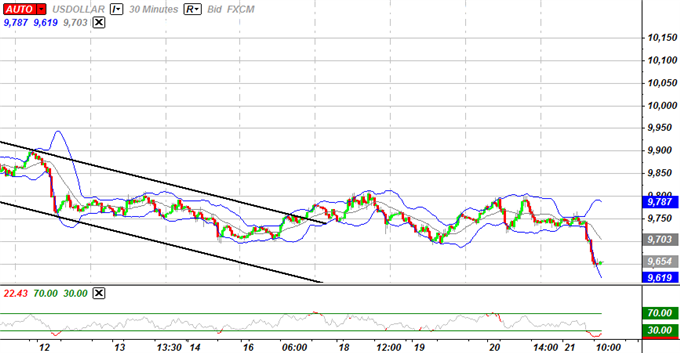 The Dow Jones-FXCM U.S. Dollar Index (Ticker: USDollar) is 0.91 percent lower from the open after moving 136 percent of its average true range, and the gauge may continue to push lower over the following week as breaks down from its current range. As the 30-minute pushes deep into oversold territory, we may see the greenback trade heavy throughout the remainder of the day, and optimism surrounding the EU Summit may stoke additional U.S. dollar selling as market participants increase their appetite for risk. However, we expect to see a short-term correction once the oscillator trades back above 30, which could lead the index to work its way back towards the upper Bollinger Band around 9,790, and the greenback may turn higher over the following week as the economic docket is expected to instill an improved outlook for future growth. 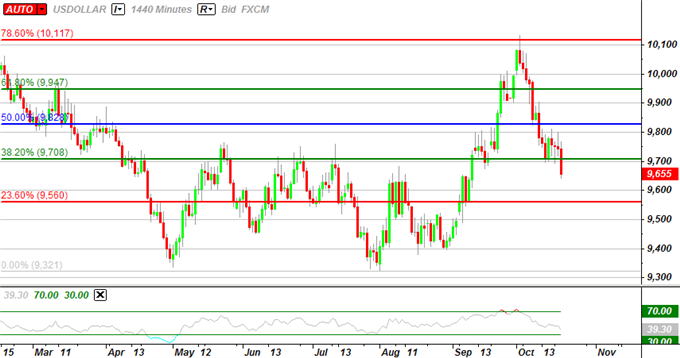 As the index breaks below the 38.2% Fibonacci retracement around 9,708, we may see the gauge make a run towards the 23.6% Fib around 9,560, and the USD may threaten the rebound from earlier this year as the Fed continues to talk up speculation for additional monetary support. Indeed, comments from FOMC board member Daniel Tarullo renewed speculation for QE3 as he urged the committee to consider additional asset purchases, and the Fed may keep the door open to expand its balance sheet further as the slowing recovery heightens the risk of a double-dip recession. However, the central bank may resort to a wait-and-see approach for the remainder of the year as policy makers expect economic activity to pickup over the coming months, and we will need to see the Fed soften its dovish tone for monetary policy in order to see the USD extend the rally from the previous month.

All four components gained ground against the USD, led by the British Pound and the Australian dollar, while the Japanese Yen advanced to a fresh record-high (75.80) against the greenback. The ongoing appreciation in the JPY certainly raises the risk of seeing a currency intervention, and the Bank of Japan may face increased pressures to stem the marked appreciation in the local currency as it dampens the outlook for the economy. However, we may see the Japanese government take matters into its own hands as the central bank refrains from directly participating in the foreign exchange market, but the efforts to normalize the exchange rate may not have the desired effect as market participants diversify away from the reserve currency. In turn, market participants may continue to fade any advances in the USD/JPY, and the exchange rate may continue to push lower over the remainder of the year as the downward trend carried over from back in 2007.