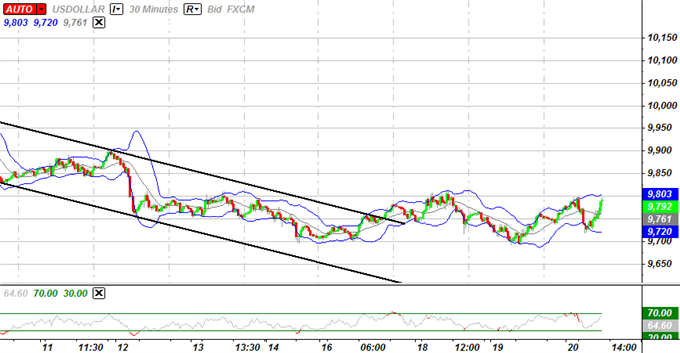 The Dow Jones-FXCM U.S. Dollar Index (Ticker: USDollar) is 0.43 percent higher on the day after moving 85 percent of its average true range, and the greenback looks poised to push higher over the remainder of the week as 9,700 holds up as near-term support. In turn, we should see the gauge work its way back towards the upper Bollinger Band around 9,799, and the greenback may resume the rebound from 9,395 as market participants scale back their appetite for risk. However, we may see the USD maintain the narrow range from earlier this week as the EU Summit comes into focus, but we may the greenback trade higher in the days ahead should European policy makers struggle to come up with a credible solution to address the sovereign debt crisis. 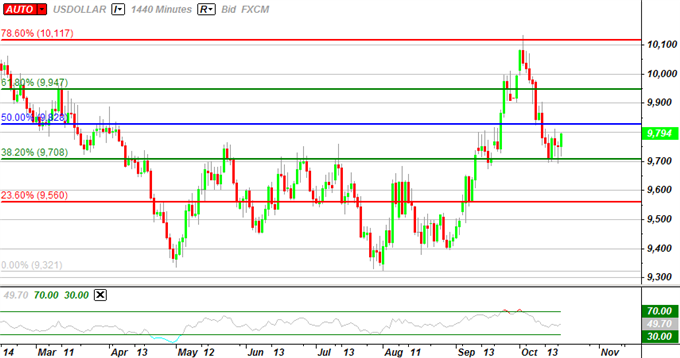 As the USD continues to trade below the 61.8 percent Fibonacci retracement around 9,947, we may see the greenback consolidate over the next 24-hours of trading, but we should see former resistance around the 38.2 percent Fib (9,708) hold up as new support as market sentiment deteriorates. As the economic docket remains fairly light for the remainder of the week, risk trends should continue to dictate price action in the foreign exchange market, but dovish comments from Fed officials may dampen the outlook for the reserve currency should the central bank continue to talk up speculation for another round of quantitative easing. However, as the recent batch of data coming out of the world’s largest economy encourage an improved outlook for future growth, the Fed may adopt a wait-and-see approach for the remainder of the year, and we may see Chairman Ben Bernanke soften his dovish tone for monetary policy as the central bank expects the economic recovery to gradually gathers pace over the coming months.

All four components weakened against the greenback, led by a 0.58 percent decline in the Euro, and the single-currency remains poised to face additional headwinds over the near-term as European policy makers struggle to meet on common ground. There’s reports that the EU will not reach a decision on leveraging the European Financial Stability Facility this weekend, and the lack of urgency to stem the risk for contagion casts a bearish outlook for the single-currency as fears surrounding the sovereign debt crisis bears down on market sentiment. As hopes surrounding the EU Summit subsides, the pullback in the EUR/USD may turn into a larger correction, and the pair may continue to give back the advance from earlier this month as it carves out a near-term top around the 61.8 percent Fibonacci retracement from the 2009 high to the 2010 low around 1.3880-1.3900.