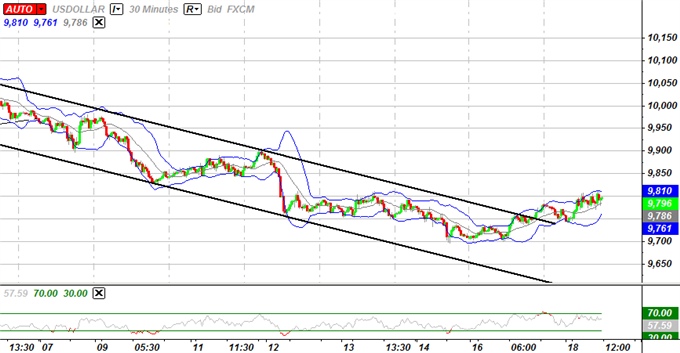 USD Pullback To Be Short-Lived, Sterling Weakness To Gather Pace

The Dow Jones-FXCM U.S. Dollar Index (Ticker: USDollar) remains 0.28 percent higher on the day after moving 77 percent of its average true range, and the rebound from 9,697 should gather pace as the gauge breaks out of the downward trending channel from earlier this month. In turn, the reserve currency should continue to retrace the sharp decline during the last two weeks, and the index should resume the advance carried over from back in August as the flight to safety gathers pace. However, as price action remains confined by the upper Bollinger Band around 9,810, we may see the greenback consolidate over the next 24-hours of trading, and the USD may fall back towards 9,760 before we see it continue to push higher. 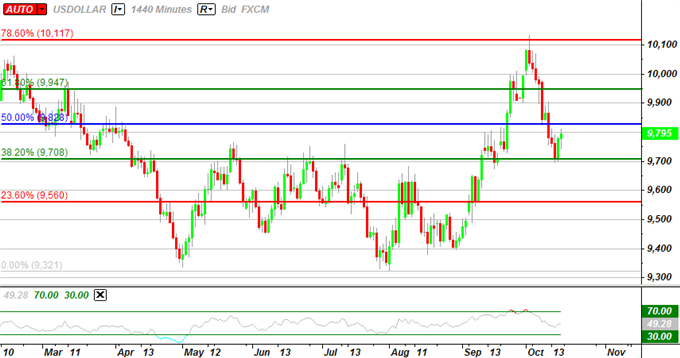 As the USD struggles to push back above the 50.0% Fibonacci retracement around 9,828, the greenback may consolidate as we head into the middle of the week, but comments from Fed Chairman Ben Bernanke is likely to heavily influence the reserve currency as market participants weigh the prospects for future policy. Indeed, the central bank head is likely to maintain a highly dovish tone for monetary policy give the slowing recovery in the world’s largest economy, and Mr. Bernanke may show an increased willingness to conduct another round of quantitative easing in an effort to stem the downside risks for growth and inflation. In turn, increase speculation for QE3 may bear down on the exchange rate, and we may see the dollar index trend sideways ahead of the Fed’s Beige Book economic report as investors reassess the fundamental outlook for the U.S.

Two of the four components weakened against the greenback on Tuesday, led by a 0.66 percent decline in the British Pound, and the GBP/USD may continue to retrace the rebound from 1.5273 should the Bank of England keep the door open to expand the asset purchase program beyond the GBP 275B target. The BoE minutes are likely to highlight the ongoing weakness within the real economy, and the central bank may see a greater risk of undershooting the 2 percent for inflation as slowing recovery in the U.K. dampens the outlook for price growth. In turn, dovish comments coming out of the MPC is likely to weigh on the exchange rate, and the GBP/USD may trade heavy over the remainder of the week as market participants increased bets for more QE.