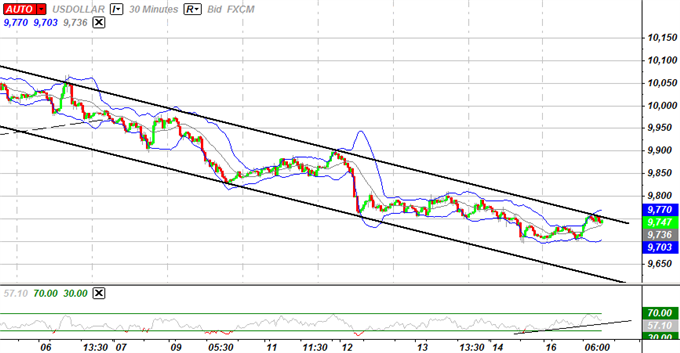 The Dow Jones-FXCM U.S. Dollar Index (Ticker: USDollar) is 0.41 percent higher from the open after moving 69 percent of its average true range, and the bullish divergence on the 30-minute relative strength index may threaten the downward trend from earlier this month as market sentiment falters. As the flight to safety gathers pace, we expect the rebound from 9,697 to accelerate over the near-term, and the greenback may recoup the losses from earlier this month as heightening uncertainties surrounding the world economy bears down on investor confidence. However, the USD may consolidate over the next 24-hours of trading as the RSI falls back from a high of 68, and the greenback may continue to trade within the downward trending channel from earlier this month as the renewed efforts to shore up global growth props up market sentiment. 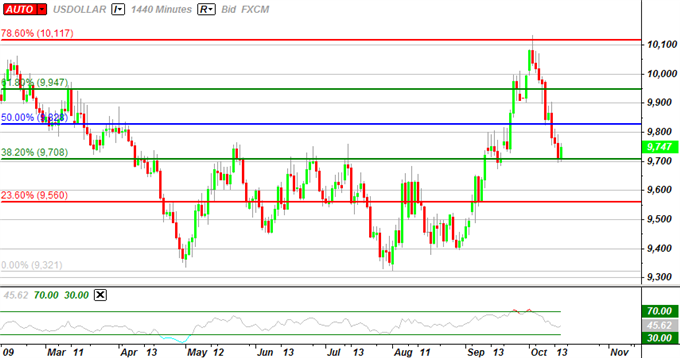 As the USD finds near-term support around the 38.2% Fibonacci retracement at 9,708, the rebound in the reserve currency looks poised to gather pace, and the index may push higher ahead of the EU Summit on October 23 as European policy makers struggle to meet on common ground. As the group lacks a credible plan to address the ongoing turmoil within the financial system, the heightening risk for contagion is likely to spark increase demands for the greenback, and the index may work its way back above the 50.0% Fib around 9,828 as investors scale back their appetite for yields. As the sovereign debt crisis comes back into focus, developments coming out of Europe is likely to move the currency market, but the recent downturn in risk may gather pace over the next 24-hours of trading as the fundamental outlook for the euro-area deteriorates.

Three of the four components weakened against the greenback, led by a 0.94 percent decline in the Australian dollar, and the high-yielding currency may face additional headwinds over the next 24-hours of trading should the central bank show an increased willingness to scale back the benchmark interest rate from 4.75 percent. The Reserve Bank of Australia meeting minutes may highlight an increased need for lower borrowing costs given the slowing recovery in the isle-nation, and the central bank may continue to scale back its hawkish tone for monetary policy as growth and inflation falter. As the AUD/USD fails to push back above the 200-Day SMA at 1.0380, the rebound from 0.9390 certainly appears to be tapering off, and the pullback from 1.0370 may gather steam in the days ahead as risk sentiment deteriorates. In turn, the exchange rate may fall back towards the 38.2% Fib from the 2010 low to the 2011 high around 0.9930-50, and the pair may threaten the run up from earlier this month as the fundamental outlook for Australia wavers.