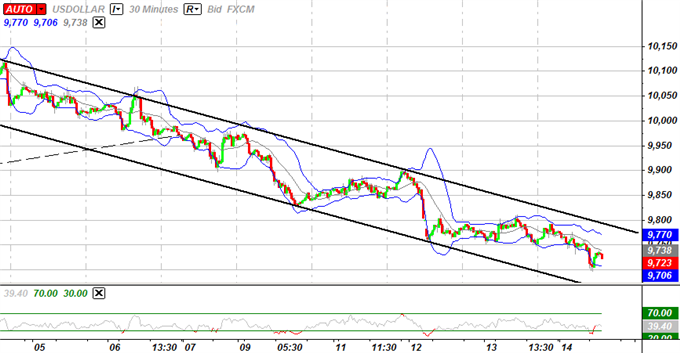 The Dow Jones-FXCM U.S. Dollar Index (Ticker: USDollar) is 0.25% lower on the day after moving 99% of its average true range, and the reserve currency may continue to give back the advance from the previous month as it trades within a downward trend. Should risk sentiment gather pace over the following week, we are likely to see the recent weakness in the USD accelerate, and the greenback may threaten the rally from 9,395 as market participants diversify away from the reserve currency. However, as the 30-minute relative strength index bounces back from oversold territory, the rebound from the monthly low (9,697) may gather pace throughout the North American trade, and the gauge may work its way back towards the upper Bollinger Band around 9,774 before we see a resumption of the downward trend. 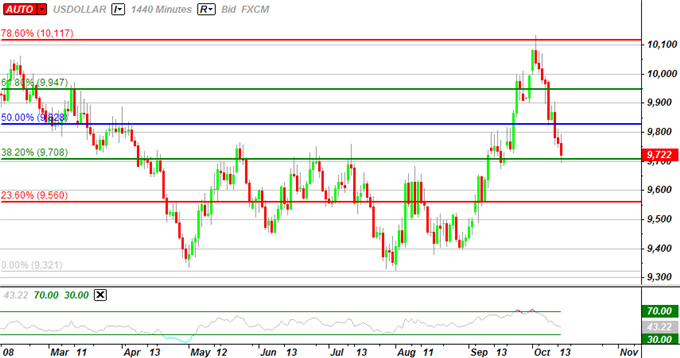 It seems as though the USD is finding near-term support around the 38.2% Fibonacci retracement at 9,708, but the reserve currency may continue to trade as the renewed efforts to address the sovereign debt crisis lifts market sentiment. As the G20 meeting takes center stage, speculation for more international aid may continue to feed risk appetite, and the group may float the idea of expanding the lending capacity of the International Monetary Fund in order shore up the European financial system. However, should the group fail to meet on common ground, we are likely to see fears surrounding the world economy resurface, and there could be a major shift in market sentiment as the outlook for global growth deteriorates. In turn, the rebound from 9,697 may gather pace over the following week, and the index may work its way back towards the 50.0% Fib around 9,828 as risk appetite falters.

Three of the four components advanced against the greenback on Friday, led by a 1.17% advance in the Australian dollar, but the high-yielding currency may face headings over the following week should the central bank talk up speculation for lower borrowing costs. The Reserve Bank of Australia meeting minutes is likely to highlight a dovish outlook for monetary policy given the slowing recovery in the isle-nation, and Governor Glenn Stevens may show an increased willingness to scale back the benchmark interest rate from 4.75% as policy makers see a limited risk for inflation. In turn, the AUD/USD may struggle to maintain the sharp rebound from 0.9390, and the exchange rate may fall back towards the 38.2% Fibonacci retracement from the 2010 low to the 2011 high around 0.9930-50..