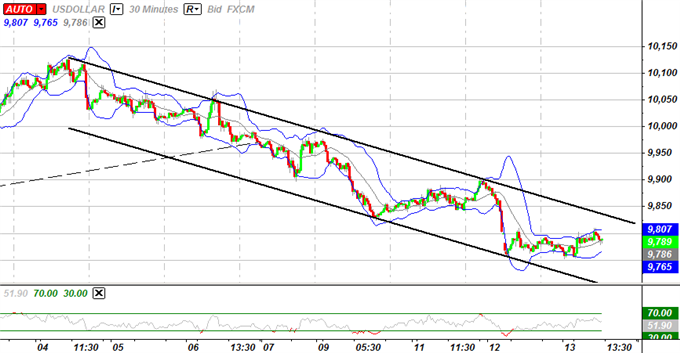 The Dow Jones-FXCM U.S. Dollar Index (Ticker: USDollar) remains 0.07% higher from the open after moving 59% of its average true range, and the rebound from 9,753 may accelerate over the next 24-hours of trading as the reserve currency benefits from safe-haven flows. However, the advance may be cut short as the index appears to be trading within a downward trending channel, and the USD may resume the sharp reversal from 10,134 as the Federal Reserve keeps the door open to conduct another round of quantitative easing. In turn, we may see the dollar continue to give back the rally from the previous month, and the greenback may weaken further over the near-term as the Fed talks up speculation for additional monetary support. 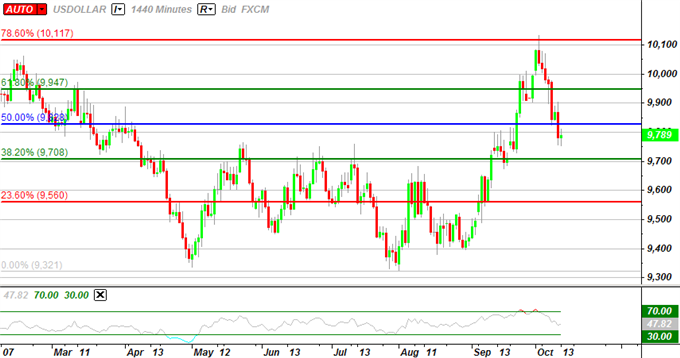 The greenback may consolidate over the remainder of the weekas the index struggles to push back above the 50.0% Fib around 9,828, and the USD may make a run at the 38.2% Fib around 9,708 as it searches for near-term support. As the FOMC minutes cast a weakened outlook for the world’s largest economy, expectations for additional monetary support may dampens the outlook for the greenback, and the central bank may employ further measures to stimulate the ailing economy as the U.S. faces an increased risk of a double-dip recession. As expectations for QE3 resurface, the dovish tone held by the Fed is likely to sap demands for the reserve currency, and the greenback may trade heavy ahead of the next meeting on November 2 as market participants weigh the outlook for monetary policy. In turn, we may see the USD face range-bound price action over the near-term, but the greenback may outperform against its major counterparts should the flight to safety reemerge.

Three of the four components weakened against the greenback on Thursday, led by a 0.49% drop in the Euro, and the single-currency is likely to face additional headwinds over the near-term as the fundamental outlook for Europe deteriorates. Although we saw Slovakia ratify the new powers for the European Financial Stability Facility, the bullish Euro reaction to the development was short-lived, and the uncertainties surrounding the fundamental outlook may continue to bear down on the exchange rate as the European Central Bank adopts a dovish tone for monetary policy. Indeed, there’s speculation that the ECB will scale back the rate hikes from earlier this year in light of the slowing recovery, but we may see the central bank look to broaden its nonstandard measures as the ongoing turmoil within the financial system weighs on the economic recovery. Speculation for additional monetary support continues to instill a bearish outlook for the EUR/USD, and the pullback from 1.3832 may turn into a larger correction as risk sentiment tapers off.