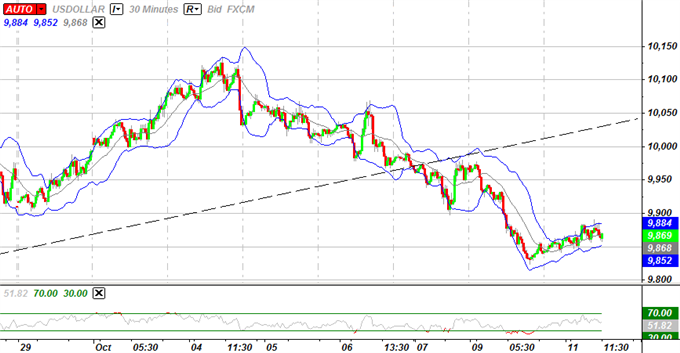 The Dow Jones-FXCM U.S. Dollar Index (Ticker: USDollar) is 0.71% lower on the day after moving 154% of its average true range, and the greenback may regain its footing over the next 24-hours of trading as the 30-minute relative strength index bounces back from a low of 18. In turn, we may see the gauge work its way back towards the upper Bollinger Band around 9,882, and former resistance around 9,750 appears to be holding up as new support as the index pares the decline to 9,755. As a result, the short-term rebound in the USD may gather pace over the remainder of the week, and the greenback may continue to recoup the losses from earlier this month as the uncertainties surrounding the global economy bears down on market sentiment. 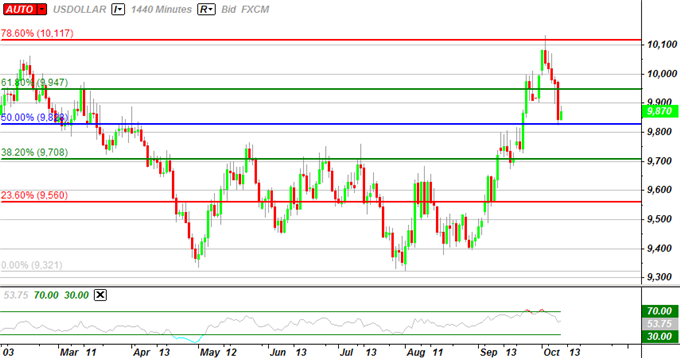 As the dollar searches for support, the pullback from 10,134 may taper off in the days ahead, but the FOMC meeting minutes on tap for later today is likely to heavily influence the USD as market participants weigh the outlook for monetary policy. The Fed is likely to maintain a cautious outlook for the world’s largest economy in light of the slowing recovery, and the central bank may keep the door open to conduct another round on quantitative easing in order to stem the risk of a double-dip recession. In turn, we may see the FOMC carry its easing cycle into the following year, and dovish comments from the central bank is likely to dampen the appeal of the greenback as market participants raise bets for QE3. However, there could be a growing rift within the committee as the stickiness in price growth raises the risk for inflation, and the Fed may look to preserve a wait-and-see approach for the remainder of the year as policy makers expect economic activity to gather pace over the coming months. Should the FOMC talk down expectations for additional monetary support, we are likely to see the greenback regain its footing, and the dollar index may work its way back above 10,000 as the rise in risk-taking behavior subsides.

Three of the four components advanced against the greenback on Wednesday, led by a 2.28% advance in the Australian dollar, and the exchange rate appears to be making a run at the 50-Day SMA (1.0244) as the sharp rebound from 0.9390 continues to gather pace. However, the fundamental outlook for the high-yielding currency remains fairly bearish and speculation for lower borrowing costs is likely to bear down on the exchange rate as the Reserve Bank of Australia shows an increased willingness to scale back the benchmark interest rate from 4.75%. According to Credit Suisse overnight index swaps, market participants see the RBA lowering the cash rate by nearly 150bp over the next 12-months, while the central bank is widely expected to deliver a 25bp rate cut at the next policy meeting on October 31. In turn, we may see the AUD/USD consolidate in the days ahead, and the high-yielding currency may face additional headwinds over the remainder of the year as the central bank highlights a slowing recovery in Australia.