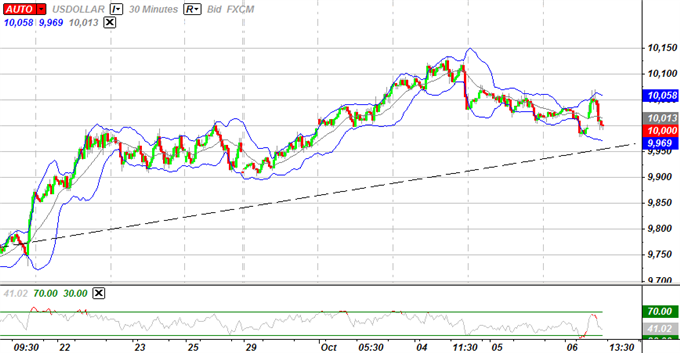 USD To Consolidate Ahead Of NFPs, Euro Outlook Remains Bearish

The Dow Jones-FXCM U.S. Dollar Index (Ticker: USDollar) is 0.17% lower on the day after moving 102% of its average true range, and we may see the greenback fall back towards the lower Bollinger Band around 9971 as the shift in market sentiment gathers pace. In turn, the index may threaten the upward trend carried over from earlier this month, and the pullback may gather pace in the days ahead as the greenback appears to have carved out a near-term top just below 10,050. However, we may see the greenback consolidate ahead of the U.S. Non-Farm Payrolls report as the data is expected to show a protracted recovery in the labor market, and a dismal employment figure may weigh on trader sentiment as it dampens the outlook for future growth. 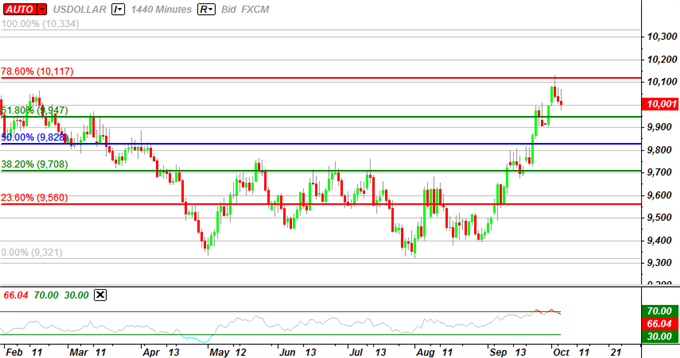 As the relative strength index falls back from overbought territory, we may see the reversal from10,134 accelerate, and the USD may fall back towards the 61.8% Fibonacci retracement around 9,947 to test for near-term support. However, the index may revert all the way back towards the 50.0% Fib around 9,828 should the rise in risk gather pace, but NFP’s may spur a shift in market sentiment as the data instills a weakened outlook for the world’s largest economy. Employment in the U.S. is expected to increase 55K in September after holding flat in the previous month, and the tepid pace of job growth is likely to weigh on risk-taking behavior as the outlook for future growth deteriorates. In turn, we may see the USD recoup the losses from earlier this week, and the index may face range-bound price action over the near-term as market participants see the Fed expanding monetary policy further over the coming months.

Three of the four components advanced against the greenback on Thursday, led by a 0.47% advance in the Euro, but the single-currency is likely to face additional headwinds over the near-term as the central bank continues to soften its hawkish tone for monetary policy. As the European Central Bank expands its nonstandard measures to shore up the financial system, it seems as though the Governing Council will also scale back the rate hikes from earlier this year in an effort to stimulate the ailing economy, and the ECB may carry its easing cycle into the following year as the region faces an increased risk of a double-dip recession. As the slowing recovery in Europe dampens the outlook for inflation, we are likely to see an increased reliance on the central bank to address the risks for the region, and speculation for additional monetary support continues to instill a bearish outlook for the single-currency as interest rate expectations falter. In turn, the rebound in the EUR/USD may be short-lived, and the exchange rate may make another run at the 38.2% Fibonacci retracement as the central bank casts a weakened outlook for the euro-area.