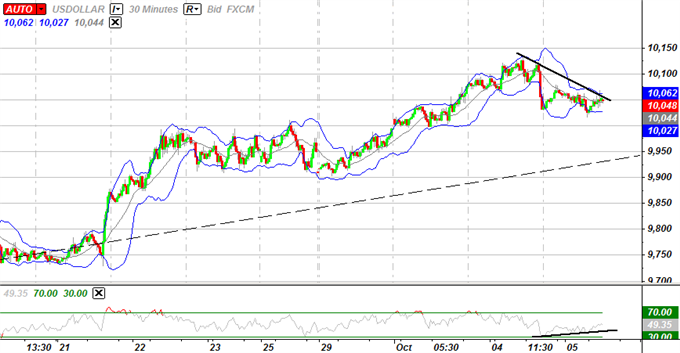 The Dow Jones-FXCM U.S. Dollar Index (Ticker: USDollar) is 0.06% lower on the day after moving 71% of its average true range, and we may see the greenback threaten the upward trend carried over from the previous month as market participants increase their appetite for risk. However, the bullish divergence in the 30-minute relative strength index could spur a rebound in the USD, and the reserve currency may continue to recoup the losses from earlier this year as the uncertainties surrounding the global economy weighs on risk-taking behavior. In turn, the rebound in risk is likely to be short-lived, and the reserve currency may push higher ahead of Friday’s Non-Farm Payrolls report as it benefits from safe-haven flows. 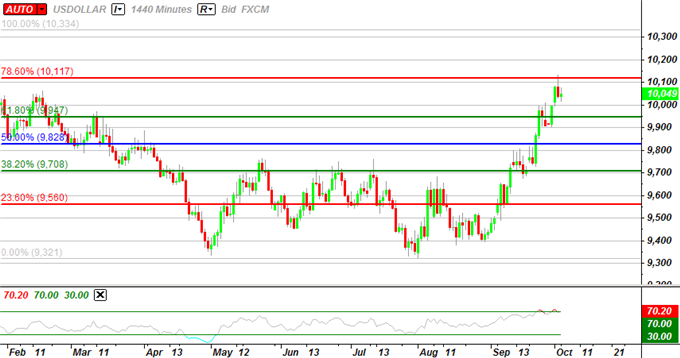 In light of the recent price developments, it seems as though the USD may be carving out a near-term top around the 78.6% Fibonacci retracement around 10,117, but the greenback should appreciate further over the near-term as long as we see the RSI hold above 70. As NFP’s are expected to show a protracted recovery in the labor market, the tepid pace of job growth could instill a bearish outlook for the greenback, and the reserve currency may give back the advance from the previous month as the data dampens the outlook for future growth. In turn, the Federal Reserve may keep the door open to expand monetary policy further, and the central bank may show an increased willingness to conduct another round on quantitative easing as the world’s largest economy faces an increased risk of a double-dip recession. As speculation for QE3 intensifies, the pullback in the USD may turn into a larger correction, and the index may fall back towards the 61.8% Fib around 9,947 to test for near-term support.

Three of the four components weakened against the greenback, led by a 0.42% decline in the British Pound, and the sterling may continue to lose ground over the near-term as the fundamental outlook for the U.K. deteriorates. Although the Bank of England is widely expected to maintain its current policy in October, the meeting minutes due out on the 19th may highlight an increased willingness to expand the asset purchase program beyond the GBP 200B target, and the MPC may carry its easing cycle into the following year as the central bank sees a risk of undershooting the 2% target for inflation. As a result, we may see the GBP/USD continue to consolidate ahead of the policy statement, but the exchange rate may work its way back towards the 50.0% Fibonacci retracement from the 2009 low to high around 1.5250 as the BoE maintains a cautious outlook for the region.