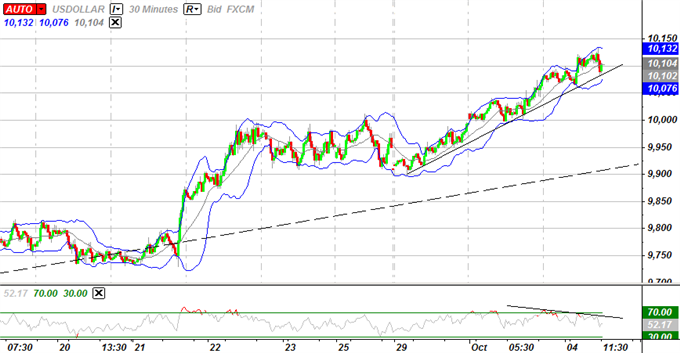 USD Rally Tempered By Bernanke, Euro Rebound To Be Short-Lived

The Dow Jones-FXCM U.S. Dollar Index (Ticker: USDollar) remains 0.38% higher from the open after moving 75% of its average true range, and the greenback should maintain the upward trend carried over from the previous month as market participants scale back their appetite for risk. However, the bearish divergence in the 30-minute relative strength index raises the risk of seeing a near-term correction in the USD, and we may see the dollar give back the sharp rally from the previous month as it remains overbought. In turn, the greenback may continue to consolidate ahead of Friday’s Non-Farm Payrolls report, but speculation for additional monetary support is likely to dampen the appeal of the dollar as the central bank maintains a cautious outlook for the world’s largest economy. 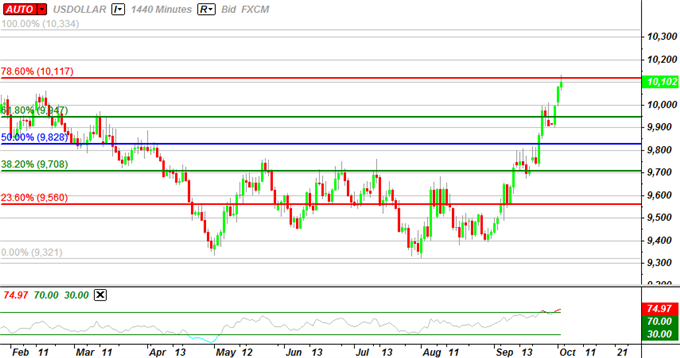 Fed Chairman Ben Bernanke talked up speculation for another round of quantitative easing while testifying in front of Congress and said that the FOMC is ‘prepared to take further action as appropriate.’ As the central bank head continues to highlight the ongoing weakness within the real economy, we may see the FOMC step up its effort to stimulate the ailing economy, but there could be a growing rift within the committee as policy makers expect economic activity to pick up over the coming months. In turn, we may see the Fed maintain a wait-and-see approach throughout the remainder of the year, but risk trends should continue to heavily influence the USD as the central bank plans to carry its zero interest rate policy well into 2013. As the dollar struggles to hold above the 78.6% Fibonacci retracement around 10,117, the index may have carved out a near-term top this week, and the reserve currency may revert back to the 61.8% Fib around 9,947 before we see the gauge continue to recoup the losses from the previous year.

The Euro outperformed against its major counterparts as European Central Bank President Jean-Claude Trichet referenced the primary mandate to ensure price stability, but the rebound may be short-lived as market participants see the Governing Council scaling back the rate hikes from earlier this year. According to Credit Suisse overnight index swaps, market participants are pricing a 100% chance for a 25bp rate cut this week, and the ECB may have little choice but to reestablish its easing cycle as the region faces an increased risk of a double-dip recession. At the same time, the Governing Council may discuss expanding its nonstandard measures as the ongoing turmoil within the financial system drags on the recovery, and the single-currency may face additional headwinds over the near-term as European policy makers struggle to restore investor confidence. In turn, the EUR/USD may threaten the rebound from earlier this year (1.2873), but the pair looks poised for a near-term correction as the RSI bounces back from a low of 25.