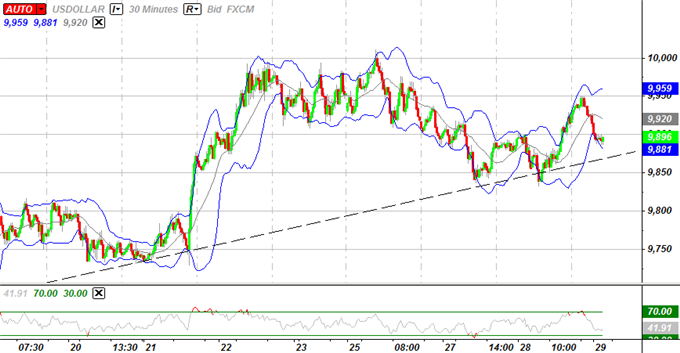 The Dow Jones-FXCM U.S. Dollar Index (Ticker: USDollar) is 0.28% lower from the open after moving 68% of its average true range, and the near-term correction may threaten the upward trend from earlier this month should the gauge make another run at 9800. However, we may see the USD firm up as the relative strength bounces back from a higher low, and the reserve currency may continue to retrace the decline from earlier this year as it benefits from safe-haven flows. As the flight to safety increases the appeal of the greenback, the near-term reversal may turn into a longer-term trend, and risk trends will continue to heavily influence the reserve currency as long as the Fed maintains its zero interest rate policy. 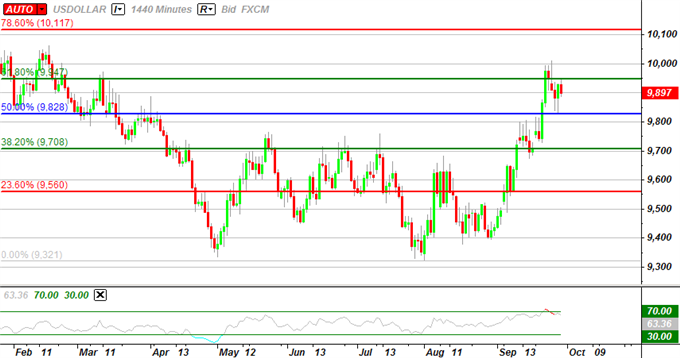 Recent comments by Fed Chairman Ben Bernanke continued to highlight the ongoing weakness within the real economy, and the central bank head may keep the door open to conduct another round of quantitative easing in an effort to encourage a sustainable recovery. As the slowing recovery dampens the outlook for inflation, Mr. Bernanke may see a growing risk of undershooting the 2% target for price growth, and the central bank may employ additional tools to stimulate the ailing economy as the region faces a growing risk of a double-dip recession. However, we may see a growing rift within the FOMC as ‘Operation Twist’ comes under increased scrutiny, and the committee may resort to a wait-and-see approach for the remainder of the year as policy makers expect economic activity to gather pace over the coming months. As the USD fails to push back above the 61.8% Fibonacci retracement around 9947, we may see the index trade sideways over the near-term, but the recent strength in the greenback may continue to gather pace as the uncertainties surrounding the global economy weigh on investor confidence.

All four components advanced against the greenback, led by a 0.53% rally in the Euro, and the single-currency may continue to recoup the losses from earlier this month as European policy makers step up their efforts to address the sovereign debt crisis. Indeed, there’s optimism that the German government will vote in favor of broadening the powers of the European Financial Stability Facility, and the development may spark a bullish reaction in the single-currency as it encourages an improved outlook for the region.

However, the looming interest rate decision dampens the outlook for the Euro as market participants see the European Central Bank expanding monetary policy further, and the Governing Council may have little choice but to delay its exit strategy into 2012 as the heightening risk for contagion dampens the outlook for the overall economy. In turn, we should see the Euro face additional headwinds in the coming days, and the EUR/USD may threaten the rebound from 1.3362 as rate expectations falter.