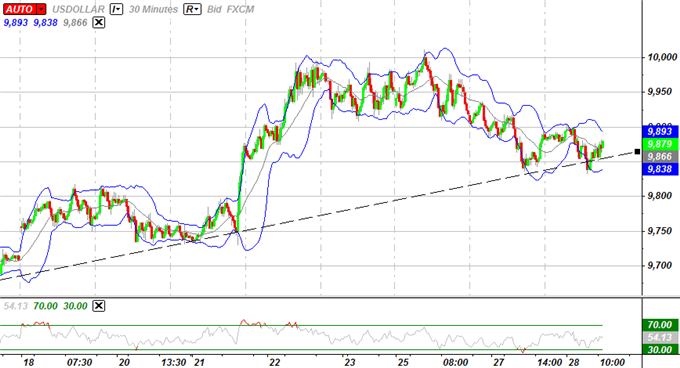 The Dow Jones-FXCM U.S. Dollar Index (Ticker: USDollar) remains 0.04% lower on the day after moving 76% of its average true range, and the greenback looks poised to recoup the losses from earlier this week as it maintains the upward trend from the beginning of the month. In turn, we should see the USD work its way back towards the upper bound of the Bollinger Band around 9893, and the index make another run at the 10,000 level as the reserve currency benefits from safe-haven flows. However, the growing risk of a double-dip recession may instill a bearish outlook for the greenback, and the Federal Reserve may keep the door open to conduct another round of quantitative easing in an effort to encourage a sustainable recovery. 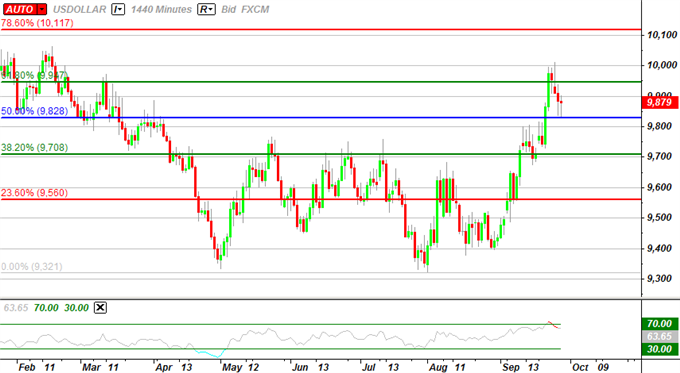 Indeed, Fed Chairman Ben Bernanke is expected to speak on the economy later today, and the central bank head may talk up speculation for additional monetary support as the outlook for growth and inflation falter. As expectations for QE3 resurface, the USD may trade heavy over the remainder of the week, but we may see the dollar index extend the rebound from 9395 as it appears to have found near-term support around the 50.0% Fib at 9828. Should risk sentiment wane throughout the North American trade, we may see currency traders move back in the dollar, and the index may work its way back above the 61.8% Fib (9947) over the next 24-hours of trading as risk trends continue to dictate price action in the foreign exchange market.

Two of the four components weakened against the greenback, led by a 0.37% decline in the Australian dollar, while the Japanese Yen outperformed against its major counterparts, with the low-yielding currency advancing 0.46% on the day. Indeed, speculation for a Yen intervention have materialized as the USD/JPY approaches the record-low (75.95) and the exchange rate may continue to push lower over the near-term as it remains capped by the 50-Day SMA at 77.07. As the dollar-yen appears to be trading within a descending triangle, the technical outlook continues to point to lower prices, and the pair may set a fresh record-low as it looks poised for a bearish breakout. However, the Bank of Japan’s effort to stem the marked appreciation in the local currency may fail to bear fruit as the USD/JPY maintains the downward trend carried over from all the way back in 2007, and the central bank may employ a broad range of tools to shore up the ailing economy as prospects for an export-led recovery turn dim.