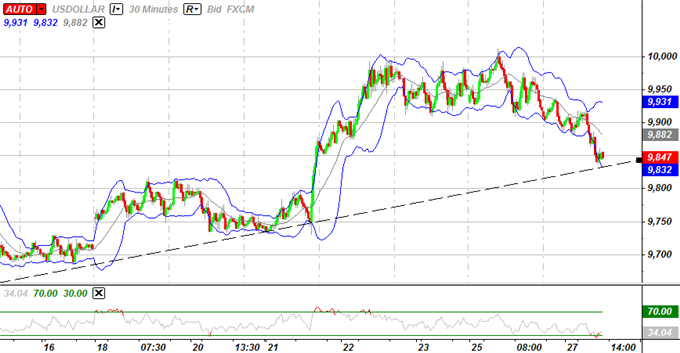 The Dow Jones-FXCM U.S. Dollar Index (Ticker: USDollar) is 0.79% lower on the day after moving 110% of its average true range, and the greenback may continue to give back the advance from earlier this month as market participants move into higher-yielding currencies. However, as the 30-minute relative strength index bounces back from oversold territory, we may see a near-term correction pan out over the next 24-hours of trading, and the index may resume the advance carried over from the previous month as it maintains an upward trend. In turn, we may see the index make another run at 10,000, and the greenback may continue to recoup the losses from the beginning of the year as the uncertainties surrounding the global economy weighs on trader sentiment. 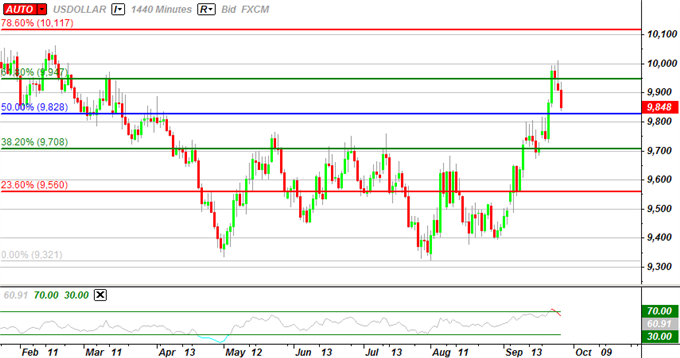 As the dollar index holds above the 50.0% Fibonacci retracement around 9828, we may see a small pullback heading into the middle of the week, and the greenback may consolidate over the near-term market participants weigh the outlook for monetary policy. Indeed, recent comments by Fed officials suggest that more will be done to stimulate the economy given the growing support for ‘Operation Twist,’ and the FOMC may keep the door open to conduct another round of quantitative easing in an effort to stem the risk for a double-dip recession. Speculation for additional monetary support may could instill a bearish outlook for the USD, and the near-term reversal in the index may gather pace as the central bank maintains a cautious tone for the world’s largest economy. However, we may see another flight-to-safety as the European debt crisis comes back into focus, and the reserve currency may continue to appreciate over the remainder of the year as the outlook for global growth remains clouded with high uncertainty.

Three of the four components gained ground against the greenback, led by a 1.33% advance in the Australian dollar, and the high-yielding currency may continue to appreciate over the next 24-hours of trading as market participants raise their appetite for risk. As the daily RSI bounces back from oversold territory, the rebound in the AUD/USD looks poised to gather pace over the remainder of the week, and the exchange rate may come up against former support (1.0200) as the pair trades back above the 38.2% Fibonacci retracement from the 2010 low to the 2011 high around 0.9930-50. However, market participants still see the Reserve Bank of Australia cutting the benchmark interest rate by nearly 150bp over the next 12-months according to Credit Suisse overnight index swaps, and the high-yielding currency may trade heavy in the coming days as the fundamental outlook for the isle-nation deteriorates.