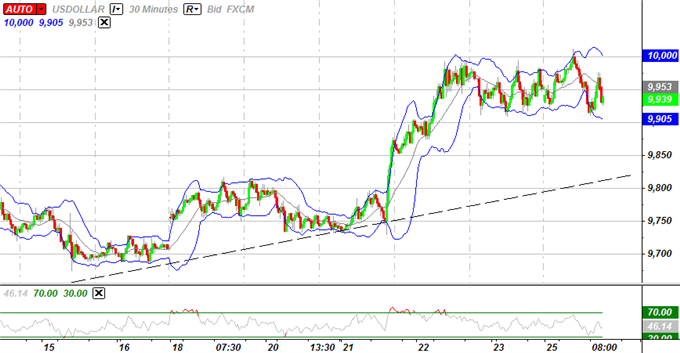 The Dow Jones-FXCM U.S. Dollar Index (Ticker: USDollar) remains 0.13% lower from the open after moving 114% of its average true range, and the rebound in trader sentiment may continue to bear down on the reserve currency as risk trends dictate price action in the foreign exchange market. We may see the greenback threaten the upward trend from earlier this month as price action struggles to hold above 10,000, and the index may fall back towards the 50.0% Fibonacci retracement around 9828 to test for near-term support. As the relative strength index falls back from overbought territory, the USD could be carving out a near-term top ahead of October, and the greenback may trade heavy in the month ahead as the global policy makers step up their efforts to prop up the world economy. 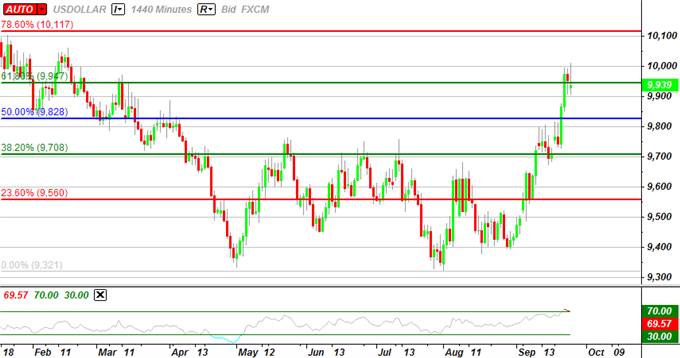 As the International Monetary Fund presses the global community to address the instability in the world economy, the increased effort to shore up investor confidence may sap demands for the reserve currency, and the greenback may continue to trade heavy as market participants raise their appetite for yields. In turn, the short-term consolidation may gather pace, and the recent decline in the USD may turn into a larger correction as trader sentiment improves. However, the rebound in risk could be short-lived as global policy makers call for additional monetary support, and the USD may continue to recoup the losses from earlier this year as the outlook for global growth falters. Should market confidence deteriorate further, the dollar index may make a run at the 78.6% Fin around 10,117, and the reserve currency may continue to outperform against its major counterparts as it benefits from safe-haven flows.

Three of the four components rallied against the USD, driven by the 0.60% advance in the British Pound, and the GBP/USD may continue to trend higher over the next 24-hours of trading as the RSI bounces back from oversold territory. As a result, we may see the rebound from 1.5327 gather pace in the days ahead, and the exchange rate come up against the 38.2% Fibonacci retracement from the 2009 low to the high around 1.5690-1.5700. However, as the Bank of England talks up speculation of expanding its asset purchase facility beyond the GBP 200B target, expectations for additional monetary easing is likely to bear down on the exchange rate, and the pair may make another run at the 50.0% Fib around 1.5250-70 as the U.K. faces a growing risk of a double-dip recession.