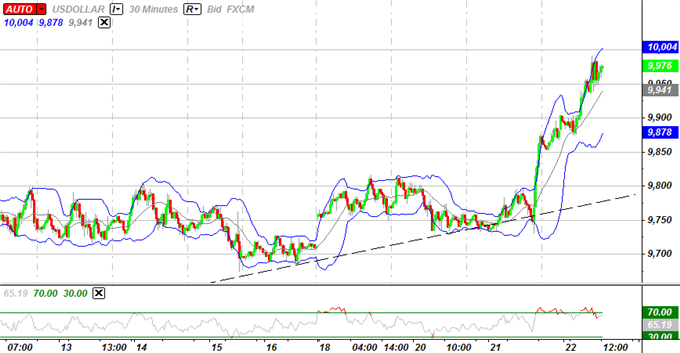 The Dow Jones-FXCM U.S. Dollar Index (Ticker: USDollar) is 1.15% higher on the day after moving 145% of its average true range, but we may get a short-term correction over the next 24-hours of trading as the relative strength index falls back from a high of 78. In turn, the USD may fall back towards the lower bound of the Bollinger Band around 9867, and the greenback may consolidate throughout the remainder of the day as the recent advance fails to produce a test of 10,000. However, we should see the greenback continue to gain ground as long as it maintains the upward trend from earlier this month, and the reserve currency may completely retrace the decline from the beginning of the year as currency traders scale back their appetite for risk. 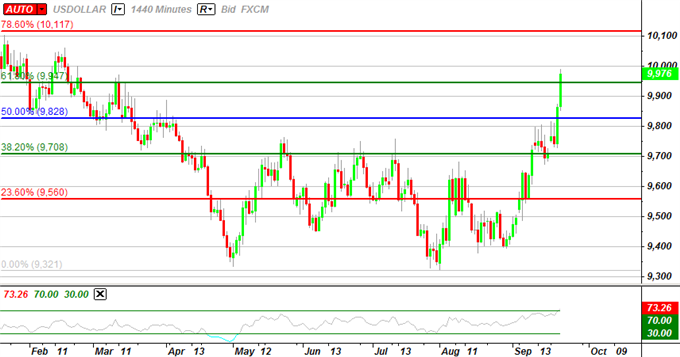 As the Group of 20 Summit scheduled for the weekend comes into focus, global policy makers may ramp up their efforts to calm market jitters, but the uncertainties surrounding the world economy may continue to weigh on trader sentiment as the major industrialized countries face an increased risk of a double-dip recession. Indeed, fears surrounding the European debt crisis paired with the slowdown in the global economy are likely to be the two main topics discussed at the G20 conference, and the group may talk up speculation for additional monetary stimulus in an effort to encourage a sustainable recovery. As investor confidence wanes, we may see the USD make a run at the 78.6% Fibonacci retracement around 10,117 should the index close above the 61.8% Fib around 9947 later today. Indeed, the overbought signal in the RSI suggest we will see higher prices until the gauge falls back below 70, and the bullish sentiment underlying the greenback may gather pace as it benefits from safe-haven flows.

Three of the four components weakened against the greenback on Thursday, led by a 2.82% decline in the Australian dollar, while Japanese Yen advanced 0.16% from the open. As the USD/JPY approaches the record-low (75.94), speculation for a Yen intervention are likely to resurface, and the Bank of Japan may face increased pressures to sell the local currency in an effort to shore up the real economy. However, the BoJ may look at alternative measures to stem the marked appreciation in the Yen and the central bank may extend its easing cycle in an effort to balance the risks for the region. In turn, we may see the recent strength in the Japanese Yen gather pace over the remainder of the week, and the USD/JPY may threaten the rebound from earlier this year as it maintains a downward trend.