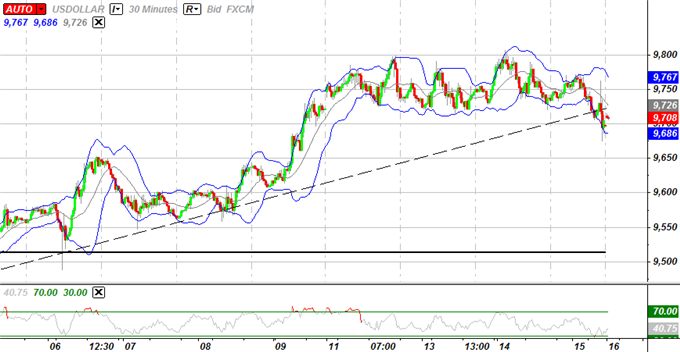 USD To Consolidate Ahead Of FOMC, Euro Outlook Remains Bearish

The Dow Jones-FXCM U.S. Dollar Index (Ticker: USDollar) is 0.13% higher from the open after moving 56% of its average true range, and the greenback may continue to recoup the losses from the overnight trade as the relative strength index bounces back from oversold territory. We should see the dollar consolidate over the near-term as it fails to maintain the upward trend from earlier this month, and price action may fall back towards 9650 to test for interim support. However, the near-term reversal may gather pace as the dollar index carves out a top around 9800, and we expect the FOMC interest rate decision to heavily influence the greenback as the central bank looks at a broad range of tools to stimulate the world’s largest economy. 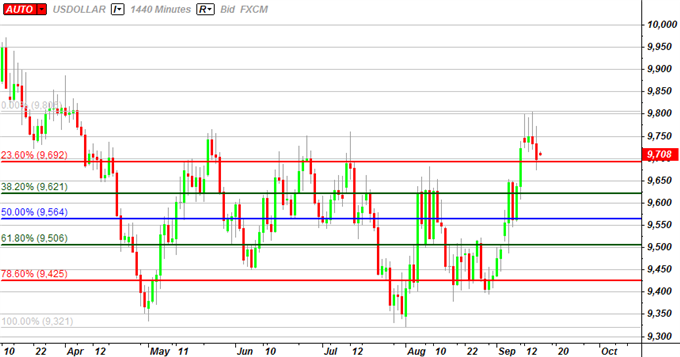 Although the FOMC is widely expected to maintain its current policy in September, the statement accompanying the rate decision could highlight an increased willingness to expand monetary policy further, and the central bank may employ a range of tools to balance the risks for the region as the U.S. faces a slowing recovery. In addition, we are likely to hear Fed Chairman Ben Bernanke reiterate his pledge to carry the zero interest rate policy well into 2013, and we expect the central bank head to preserve a dovish tone for future policy as the fundamental outlook remains clouded with high uncertainty. However, given the stickiness in price growth, the committee may see an increased risk for inflation, and the Fed may uphold a wait-and-see approach throughout the remainder of the year as policy makers expect the economic recovery to gather pace in the months ahead. Should the dollar index continue to close above the 23.6% Fibonacci retracement around 9692, we may see the greenback trade within a tight range over the following week, but the reversal from 9806 may gather pace as long as the Fed maintains a cautious outlook for the world’s largest economy.

Two of the four components weakened against the greenback on Friday, led by a 0.58% decline in the euro, and the EUR/USD may continue to give back the rebound from 1.3496 as the fundamental outlook for Europe deteriorates. As the EU struggles to meet on common ground, the lack of urgency to address the heightening risk for contagion continues to dampen the outlook for the single-currency, and we are likely to see a greater reliance on the European Central Bank to address the risks for the region given the growing rift amongst government officials. In turn, we are likely to see the ECB expand its nonstandard measures over the coming months, and the central bank may continue to soften its hawkish tone for monetary policy as the region copes with a slowing recovery. An increased risk for a double-dip recession could ultimately force the Governing Council to carry its neutral policy stance into the following year, and the committee may see a risk of undershooting the 2% for inflation as growth falters.