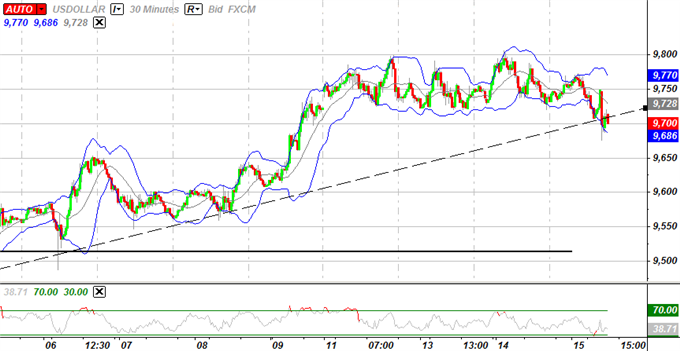 The Dow Jones-FXCM U.S. Dollar Index (Ticker: USDollar) remains 0.38% lower on the day after moving 123% of its average true range, and the near-term correction may gather pace throughout the remainder of the week as greenback fails to maintain the upward trend from earlier this month. However, it seems as though we will see the index consolidate over the next 24-hours of trading as the relative strength index bounces back from oversold territory, and the rebound from 9676 may gather pace throughout the North American trade as the rise in risk sentiment tapers off. In turn, the sharp decline in the index may turn out to be a false breakdown, and the USD may work its way back towards the upper bounds of the Bollinger Band around 9769. 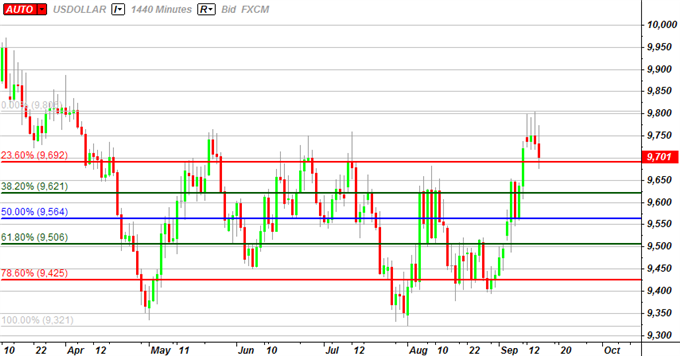 As the recent developments coming out of the world’s largest economy dampens the outlook for future growth, the Federal Reserve may open the door to expand monetary policy further, and the central bank may employ a broad range of tools to balance the risks for the region as it aims to encourage a sustainable recovery. However, the stickiness in price growth dampens the prospects of seeing another round of quantitative easing as inflation continue to feed into the real economy, and we may see the FOMC endorse a wait-and-see approach at the rate decision scheduled for the following week as the fundamental outlook remains clouded with high uncertainty. In turn, we may see a growing rift within the committee, and the index may trend sideways ahead of the meeting as investors weigh the prospects for future policy.

Three of the four components rallied against the greenback on Thursday, led by a 0.80% advance in the euro, but the recent strength in the single-currency is likely to be short-lived as European policy makers struggle to address the sovereign debt crisis. Indeed, the European Central Bank announced, in coordination with the Federal Reserve, the Bank of England, the Bank of Japan, and the Swiss National Bank, plans ‘to conduct three U.S. dollar liquidity-providing operations with a maturity of approximately three months covering the end of the year,’ and the ECB looks as though it will continue to take additional steps to stabilize the financial system as the EU struggles to meet on common ground. The increased reliance on the central bank could force the Governing Council to further expand its nonstandard measures over the coming months, and the ECB certainly has little choice but to delay its exit strategy further as the sovereign debt crisis bears down on the real economy. In turn, we are likely to see the euro face additional headwinds over the near-term, and the single-currency should consolidate over the remainder of the week as the exchange rate struggles to hold above the 61.8% Fibonacci retracement from the 2009 high to the 2010 low around 1.3890-1.3900.