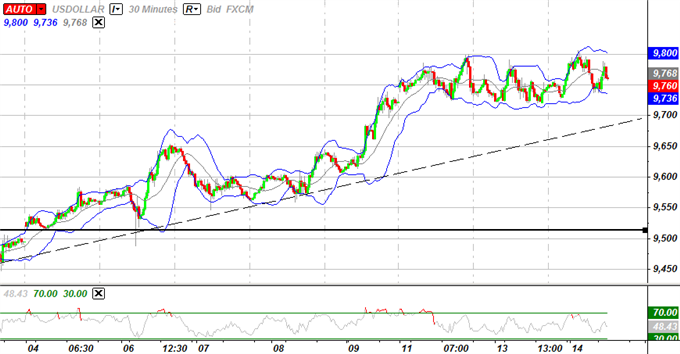 The Dow Jones-FXCM U.S. Dollar Index (Ticker: USDollar) remains 0.23% higher from the open after moving 104% of its average true range, and the reversal from 9806 may gather pace over the next 24-hours of trading as the greenback appears to be carving a near-term top. In turn, we may see the index threaten the upward trend from earlier this month, and price action may fall back towards 9700 as investors diversify away from the greenback. The shift in market sentiment could ultimately fuel a larger correction in the USD and the reserve currency may trade within a broad range over the remainder of the week as investors weigh the outlook for future policy. Should price action break below 9700, we should see the index come up against former resistance around 9515, which could come in as new support. 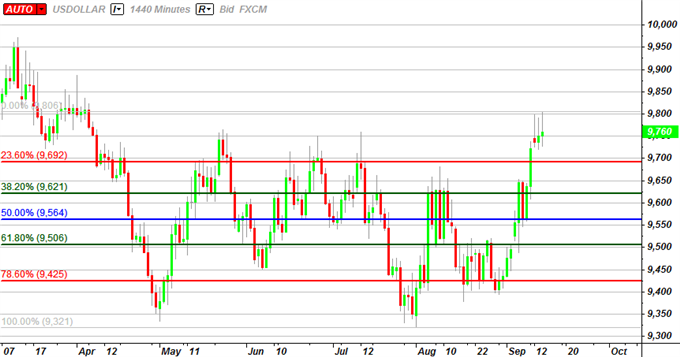 As the USD fails to hold above 9800, it seems as though we will see the broad range from earlier this year come back into play, and the near-term correction may accelerate ahead of the FOMC interest rate decision on tap for the following week as market participants weigh the outlook for future policy. Although Fed Chairman Ben Bernanke is scheduled to speak on Thursday at 12:45 GMT, we expect the central bank head to avoid any comments on the two-day meeting, but Mr. Bernanke may hold a cautious tone during his speech on systemic risk given the ongoing turmoil within the financial system. In turn, the comments may spur speculation for additional monetary support, but the U.S. consumer price report could reflect a heightening risk for inflation as price growth is expected to accelerate in August. Should price pressures intensify, members of the FOMC may vote against further easing, and we may see a growing rift within the committee as it maintains its dual mandate to ensure price stability while promoting full-employment.

Two of the four components weakened against the greenback on Wednesday, led by a 0.84% decline in the Australian dollar, while the Japanese Yen advanced across the board as market participants look for an alternative to the greenback. Indeed, speculation for a Yen intervention have resurfaced in light of the recent appreciation in exchange rate, and the Bank of Japan may increase its efforts to balance the risks for the region as the strength in the local currency drags on the real economy. The recent comments by BoJ board member Ryuzo Miyao suggests that the central bank will continue to act against its national currency as it dampens the outlook for future growth, and the central bank may employ a wide range of tools to sap demands for the low-yielding currency in an effort to balance the risks for the region.