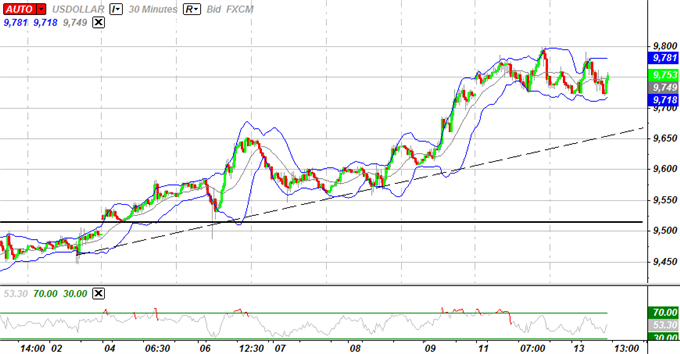 The Dow Jones-FXCM U.S. Dollar Index (Ticker: USDollar) is 0.07% higher on the day after moving 93% of its average true range, and the near-term correction may gather pace as the greenback appears to have carved a near-term top just below 9800. In turn, the dollar index threaten the upward trend from earlier this month, and the exchange rate may fall back below 9700 as market sentiment improves. However, should price action continue to trade above 9650, we are likely to see the near-term rally in the USD accelerate, and the greenback may continue to recoup the losses from earlier this year as the uncertainties surrounding the global economy bears down on trader sentiment. 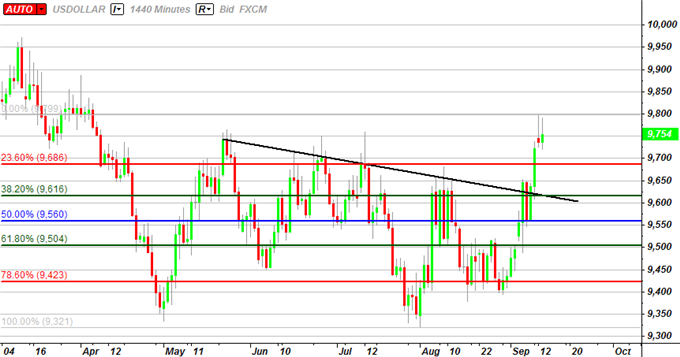 As the dollar index breaks out of the downward trend carried over from May, the sharp rebound carried over from the end of August may gather pace in the days ahead, but we may see a near-term correction unfold ahead of the Fed interest rate decision scheduled for September 21 as the central bank talks up speculation for more monetary stimulus. As the FOMC curbs its outlook for future growth, Chairman Ben Bernanke may introduce additional tools to shore up the world’s largest economy, and the central bank may extend its easing cycle as policy makers see a limited risk for inflation. Beyond speculation for another round of quantitative easing, the Fed may employ a range of tools to stem the downside risks for growth, and the central bank may reiterate its pledge to carry the zero interest rate policy well into 2013 in an effort to encourage a sustainable recovery. In turn, the near-term advance in the USD could be short-lived, and the greenback may give back the sharp advance from earlier this month as the Fed shows an increased willingness to expand monetary policy further.

Three of the four components weakened against the greenback on Tuesday, led by a 0.45% decline in the Australian dollar, and the high-yielding currency may face additional headwinds over the fundamental outlook for the isle-nation deteriorates. In turn, the Reserve Bank of Australia may continue soften its hawkish tone for monetary policy ,and the central bank may look to abandon its ‘mildly restrictive’ stance in an effort to balance the risks for the region. According to Credit Suisse overnight index swaps, market participants see the RBA cutting borrowing costs by nearly 150bp over the next 12-months, and the AUD/USD should continue to give back the rebound from the previous month (0.9927) as interest rate expectations falter.