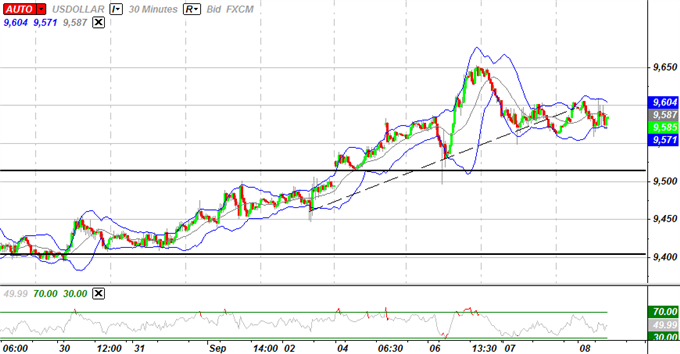 The Dow Jones-FXCM U.S. Dollar Index (Ticker: USDollar) remains 0.17% higher from the open after moving 64% of its average true range, and the reserve currency may continue to consolidate over the remainder of the week as price action breaks out of the upward trend from earlier this month. In turn, the short-term reversal from 9653 may gather pace over the next 24-hours of trading, and the index may fall back towards former resistance around 9515 to test for near-term support. However, dovish comments from Fed Chairman Ben Bernanke could exacerbate the recent weakness in the greenback, and the USD may give back the rebound from 9395 as market participants speculate the FOMC to expand monetary policy further over the coming months. 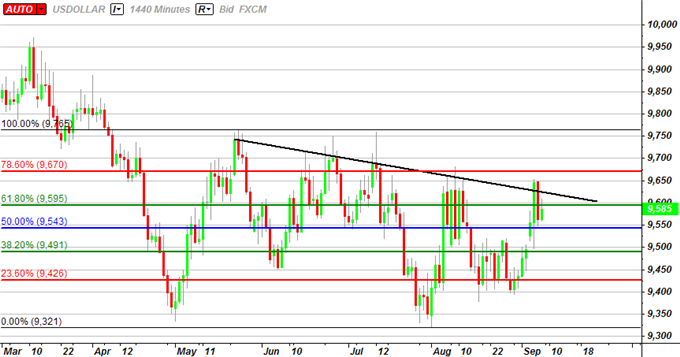 As the world’s largest economy faces a slowing recovery, we expect Chairman Bernanke to retain a dovish outlook for monetary policy, and the central bank head may talk up speculation for additional easing as the region faces an increased risk of a double-dip recession. As the FOMC looks at a range of policy tools to stimulate the ailing economy, the committee may employ additional monetary stimulus at the next rate decision on September 21, and the central bank may uphold its pledge to carry the zero interest rate policy well into 2013 in an effort to encourage a sustainable recovery. At the same time, we may see a growing rift in the Fed as the headline reading for inflation remains well-above the 2% target, but the majority may push for another round of quantitative easing in response to the ongoing weakness within the real economy. Should the FOMC vote to expand monetary policy further, the shift would instill a bearish outlook for the USD, and the downward trend in the reserve currency may gather pace over the near-term as the Fed extends its easing cycle.

Three of the four components weakened against the greenback, led by a 0.87% decline in the Euro, and the single-currency is likely to face additional headwinds over the near-term as the central bank continues to soften its hawkish tone for monetary policy. Indeed, the recent comments from ECB President Jean-Claude Trichet suggests the Governing Council will preserve a wait-and-see approach throughout the remainder of the year, but the central bank may face increased pressures to shore up the economy as policy makers curb their outlook for growth and inflation. Given the increased reliance on the ECB, the council may have little choice but to delay its exit strategy further, and the central bank may see scope expand its nonstandard measures as the ongoing turmoil within the financial system bears down on the real economy. In turn, the recent decline in the EUR/USD looks poised to gather pace in the days ahead, and the exchange rate may threaten the rebound from 1.3836 as the fundamental outlook for Europe deterates.