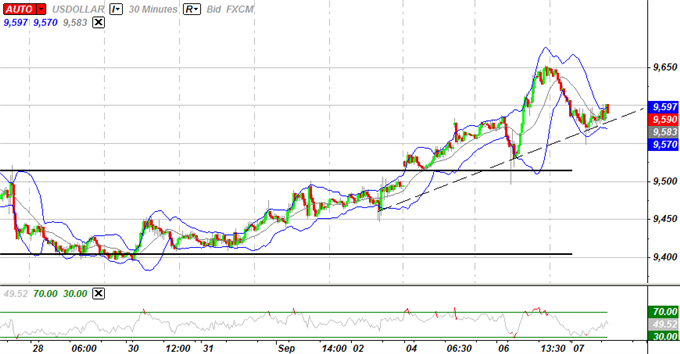 The Dow Jones-FXCM U.S. Dollar Index (Ticker: USDollar) is 0.51% lower on the day after moving 105% of its average true range, and its seems as though the greenback has carved out a top around 9650, which could lead the reserve currency to threaten the upward trendline from the beginning of the month. If price action work its way towards the lower Bollinger Band around 9571, the reversal from 9653 may gather pace over the remainder of the week, and the greenback may give back the advance from earlier this month as market participants increase their appetite for risk. However, we may see the USD regain its footing as the relative strength index continues to come off of the lows, and the near-term rally may gather pace as the index continues to mark higher highs paired with higher lows. 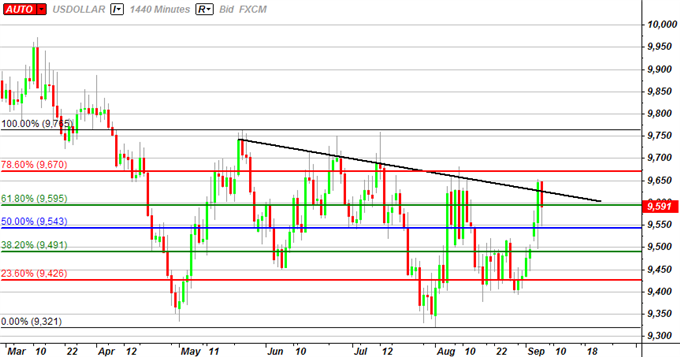 The Fed’s Beige Book is likely to highlight the ongoing weakness in the world’s largest economy, and the central bank may show an increased willingness to expand monetary policy further in order to combat the slowing recovery. In light of the recent developments, we may see the central bank continue to curb its outlook for growth and inflation, and the general consensus amongst the 12 districts could denote a heightening risk for a double-dip recession as private sector activity deteriorates. In turn, the FOMC may adopt a range of policy tools to stimulate the ailing economy at the next rate decision on September 21, and the committee may reiterate its pledge to carry the zero interest rate policy well into 2013 in order to encourage a sustainable recovery. As the near-term rally fails to produce a test of the 78.6% Fibonacci retracement around 9670, it seem as though we will see the downward trend continue to pan out over the near-term, and the USD may threaten the rebound from earlier this month as Fed extends its easing cycle.

All four components advanced against the USD, led by a 1.19% advance in the Australian dollar, and the high-yielding currency may continue to push higher over the near-term as the central bank talks down speculation for lower borrowing costs. Indeed, Reserve Bank of Australia Governor Glenn Stevens endorsed a wait-and-see approach for the remainder of the year after the 2Q GDP report topped market expectations, but went held a cautious outlook for the isle-nation as the fundamental outlook for the global economy remains clouded with high uncertainty. Moreover, the central bank head softened his hawkish tone for monetary policy, noting that the ongoing weakness within the real economy may dampen price growth, and reiterated that the economic recovery appears to be weaker than initially expected while speaking in Perth. In light of the recent comments, it seems as though the RBA will keep the benchmark interest rate at 4.75% over the coming months, but the central bank may look to abandon its ‘mildly restrictive’ policy in order to balance the risks for the region.