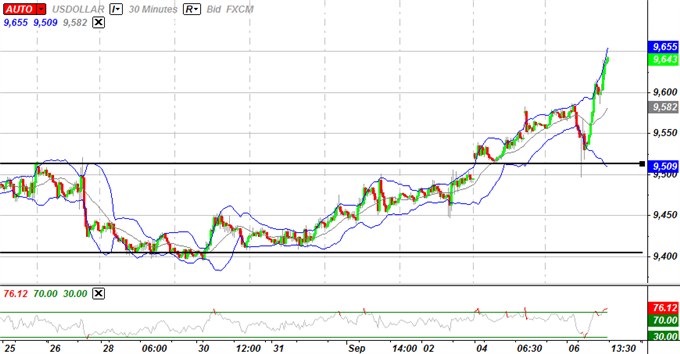 The Dow Jones-FXCM U.S. Dollar Index (Ticker: USDollar) remains 0.87% higher on the day after moving 191% of its average true range, and the greenback may continue to retrace the decline from the previous month as investors scale back their appetite for risk. However, the dollar index looks poised for a short-term correction as the relative strength index pushes into overbought territory, and we may see a small pullback before the greenback continues to move higher. In turn, the index fall back towards former resistance around 9514, which could act as new support going forward, and the bullish sentiment underlying the U.S. dollar may gather pace as the uncertainties surrounding the global economy bears down on investor confidence. 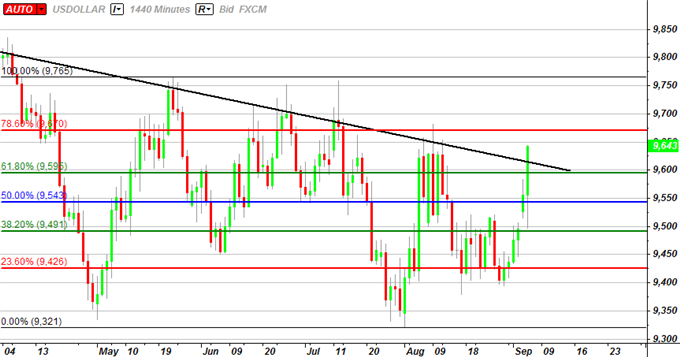 As the Swiss National Bank takes extraordinary steps to sap demands for the franc, the U.S. dollar should be the prime beneficiary of safe-haven flows, and the ongoing turmoil within the European financial system may continue to weigh on investor confidence as policy makers struggle to contain the sovereign debt crisis. As the dollar index threatens the downward trend from earlier this year, the rebound from 9321 looks poised to gather pace going forward, and the greenback may continue to recoup the losses from the first-half of 2011 as the flight to safety accelerates.

As the general strike in Italy puts increased pressure on the government to abandon the EUR 45.5B budget-cutting program, a growing rift amongst Italian policy makers would raise the risk for a credit-rating downgrade, and we may see the European Central Bank continue to soften its hawkish tone for monetary policy as the fundamental outlook for the region deteriorates. As the ECB is widely expect to keep the benchmark interest rate at 1.50%, we should see President Jean-Claude Trichet talk down speculation for higher borrowing costs, and the Governing Council may continue to delay its exit strategy further as the heightening risk for contagion bears down on the economic recovery.

All four components weakened against the greenback, led by a 1.13% decline in the sterling, and the British Pound may continue to trade heavy as the slowing recovery in the U.K. raises the risk for a double-dip recession. As economic activity deteriorates, we expect the Bank of England to carry its current policy into the following year, but the board may show an increased willingness to expand the asset purchase program beyond the GBP 200B target as Governor Mervyn King sees a risk of undershooting the 2% target for inflation. In turn, we may see a growing rift within the Monetary Policy Committee, and dovish comments from the group is likely to weigh on the exchange rate as interest rate expectations falter. In response, the GBP/USD may threaten the rebound from 1.5781, and the exchange rate may give back the advance from earlier this year as market participants scale back their appetite for yields.