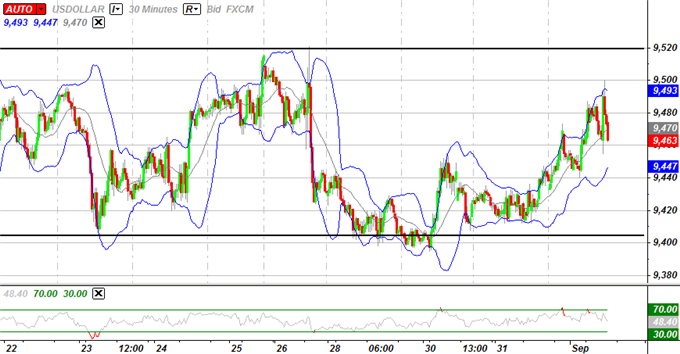 USD To Consolidate Ahead Of NFP’s, Euro To Threaten Range

The Dow Jones-FXCM U.S. Dollar Index (Ticker: USDollar) remains 0.23% higher on the day after moving 76% of its average true range, and the rebound may gather pace throughout the North American trade, which could produce a test of 9520 for near-term resistance. However, the pullback from 9500 may pan out over the remainder of the day and the index may fall back towards the lower bounds of the Bollinger Bands around 9448 as the relative strength index falls back from overbought territory. In turn, the USD should consolidate during the overnight trade, but the Non-Farm Payrolls report is likely to heavily influence price action on Friday as market participants weigh the outlook for future growth. 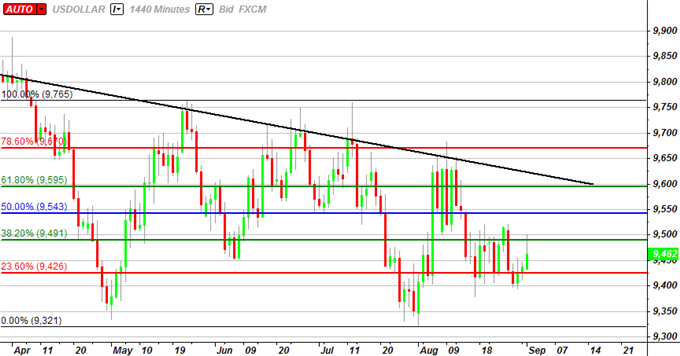 Employment in the world’s largest economy is expected to increase 68K in August after expanding 117K in the previous month, and the slowdown could encourage the Federal Reserve to expand monetary policy further as it aims to promote a sustainable recovery. Indeed, the recent comments from Fed Chairman Ben Bernanke suggests that the central bank will go beyond expanding its balance sheet, and the FOMC may employ a slew of policy tools to stimulate the ailing economy as the U.S. faces an increased risk of a double-dip recession. As the Fed shows an increased willingness to implement additional monetary support, the USD should retain its strong correlation to risk, and a dismal NFP report could spark a rally in the reserve currency as it benefits from safe-haven flows. In turn, the rebound in the dollar index may accelerate over the remainder of the week, but the USD still faces may technical hurdles to break out of the bearish formation as the greenback consolidates within the narrow range from the end of August.

Three of the four components weakened against the greenback on Thursday, led by a 0.59% decline in the Euro, and the EUR/USD may continue to give back the advance from the previous month as it appears to have carved out a near-term top in August. As the euro-dollar struggles to hold above the 78.6% Fibonacci retracement from the 2009 high to the 2010 low around 1.4440-60, we should see the short-term reversal from 1.4548 gather pace in the days ahead, and the single-currency is likely to face additional headwinds over the near-term as there appears to be a growing rift amongst European policy makers. In light of the recent comments by European Central Bank board member Jens Weidmann, the central bank’s participation in the financial market may come under increased scrutiny, but there certainly seems an increased reliance on the ECB to address the risks for the region as European policy makers struggle to meet on common ground. In turn, we should see central bank President Jean-Claude Trichet continue to soften his hawkish tone at the rate decision scheduled for the following week, and the EUR/USD may threaten the rebound from 1.4055 as the fundamental outlook for Europe deteriorates.