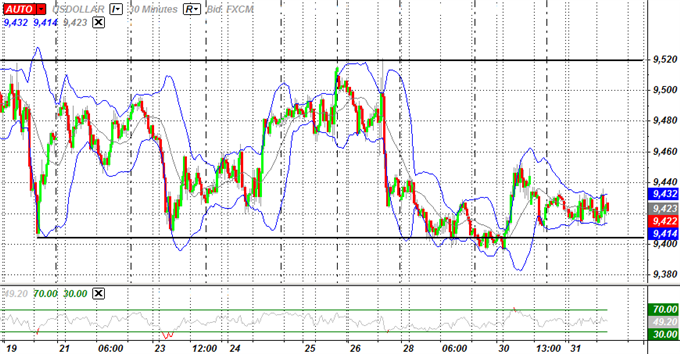 The Dow Jones-FXCM U.S. Dollar Index (Ticker: USDollar) is 0.04% higher on the day after moving only 31% of its average true range, and the greenback may continue to trade within the previous day’s range as price action remains capped by the Bollinger Bands. However, the narrowing range highlights a risk of seeing a short-term breakout in the USD, and the reserve currency may continue to recoup the losses from earlier this month as the rise in risk appetite appears to be tapering off. In turn, the rebound from 9395 may gather pace, and the index may approach near-term resistance around 9520 as market sentiment falters. 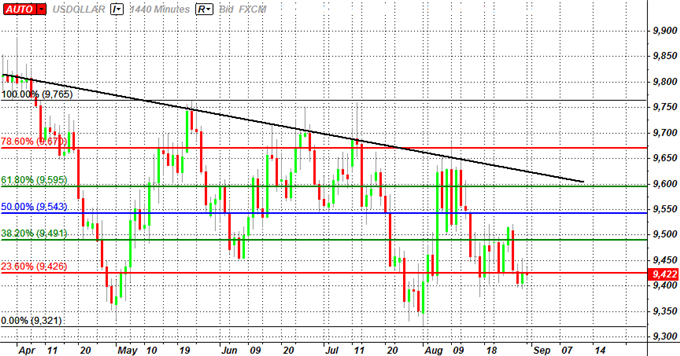 In light of the recent data coming out of the world’s largest economy, it seems as though we will see a soft Non-Farm Payrolls report on Friday, while the ISM’s gauge for manufacturing is expected to show the first contraction since July 2009. In response, there’s increased speculation that the Fed will take further steps to stimulate the ailing economy at the two-day meeting on September 21, but the move is likely to weigh on the exchange rate as investors continue to diversify away from the reserve currency. As a result, the dollar index may continue to trend lower over the medium-term, and we should see the strong ties with risk be maintained as long as the Fed carries on its easing cycle.

Two of the four components weakened against the greenback, led by a 0.21% decline in the euro, and the single-currency may continue to underperform against its counterparts as the fundamental outlook for Europe deteriorates. Beyond the slowing recovery in the euro-area, the ongoing turmoil within the banking system could force the European Central Bank to delay its exit strategy further, and there appears to be an increased reliance on the ECB to address the risks for the region as the EU falls back to more of a reactionary approach. In turn, the Governing Council may expand its nonstandard measures to prop up the economy, and the single-currency remains at risk of facing additional headwinds over the near-term as the fundamental outlook remains clouded with high uncertainty. As the EUR/USD struggles to hold above the 78.6% Fibonacci retracement from the 2009 high to the 2010 low around 1.4440-60, the pullback from 1.4548 may gather pace in the days ahead, and the exchange rate may give back the advance from earlier this month as fears surrounding the sovereign debt crisis continues to bear down on market sentiment.