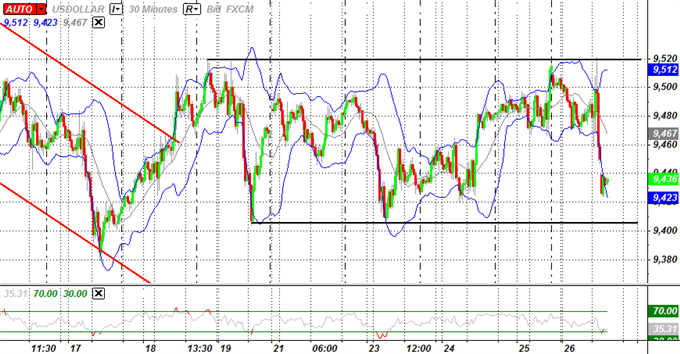 The Dow Jones-FXCM U.S. Dollar Index (Ticker: USDollar) is 0.92% lower from the open after moving 98% of its average true range, and the reserve currency may continue to give back the advance from earlier this week as investors raise their appetite for risk. As the relative strength index pushes into oversold territory, the sharp decline may gather pace throughout the remainder of the day, and the index could fall back towards near-term support around 9405 as it gives back the advance from earlier this week. However, the USD may consolidate in the days ahead as we have the Federal Open Market Committee meeting minutes paired with the U.S. Non-Farm Payrolls report on tap for the following week, and the slew of event risks could heavily influence the greenback as market participants weigh the outlook for future growth. 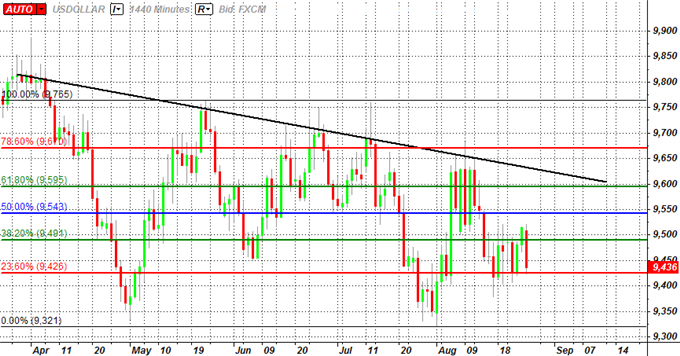 Indeed, Fed Chairman Ben Bernanke talked down speculation for another round of quantitative easing, stating that central bank is not promoting new steps to stimulate the ailing economy, and the committee looks as though it will preserve a wait-and-see approach throughout the remainder of the year as policy maker expect the recovery to gather pace over the coming months. As Mr. Bernanke encourages Congress to support the real economy, the government may face increased pressures to employ additional fiscal stimulus, but the Fed may keep the door open to expand monetary policy further as the FOMC is expected to hold a ‘fuller discussion’ of tools as the rate decision next month. In turn, the USD may continue to consolidate in the week ahead, and the greenback may trade within a broad range until we get an clearer picture on what the central bank intends to do over the medium-term.

All four components advanced against the greenback, let by a 1.37% advance in the Australian dollar, and the high-yielding currency may continue to appreciate over the near-term as the central bank talks down expectations for lower borrowing costs. As Reserve Bank of Australia Governor Glenn Stevens continues to endorse the ‘mildly restrictive’ policy, it seems as though we will see the benchmark interest rate staying at 4.75% for the remainder of the year, and the central bank head may retain a neutral tone heading into 2012 as board members see a limited risk for inflation. In turn, the near-term rebound in the AUD/USD could gather pace in the days ahead, and the exchange rate may continue to retrace the sharp decline from earlier this month as the RBA remains fairly optimistic towards the economy. Nevertheless, market participants still see borrowing costs falling by more than 125bp over the next 12-months according to Credit Suisse overnight index swaps, and speculation for lower interest rates may continue to drag on the exchange rate as the economic docket shows a slowing recovery in the isle-nation.