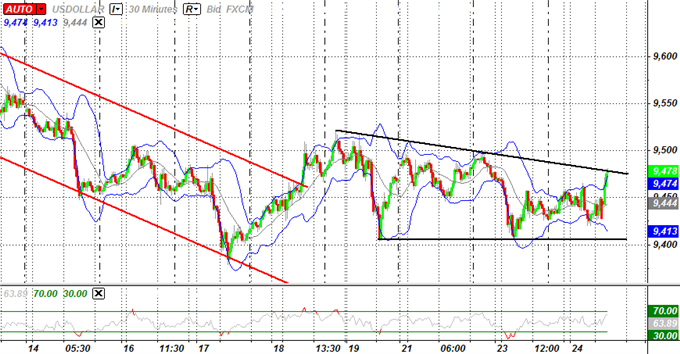 The greenback pared the decline from earlier this week and the reserve currency may continue to consolidate in the days ahead as the Jackson Hole Economic Policy Symposium takes center stage. The Dow Jones-FXCM U.S. Dollar Index (Ticker: USDollar) is 0.51% higher from the open after moving 62% of its average true range, and the rebound may gather pace over the next 24-hours of trading as the greenback threatens the descending triangle formation. However, as the relative strength index approaches overbought territory, we could see the USD consolidate over the next 24-hours of trading, and the greenback could face a sharp selloff as price action approaches the apex. As the economic docket remains fairly light for the next 24-hours of trading, market sentiment should dictate price action for the major currencies, and the rebound in risk aversion may gather pace as the uncertainties surrounding the global economy weighs on investor confidence. 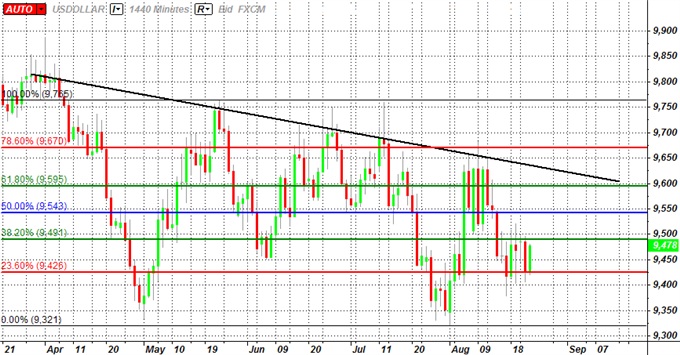 As the USD trades within the previous day’s range, the index may trend sideways in the days ahead, but comments from Fed Chairman Ben Bernanke is likely to heavily influence the reserve currency as market participants weigh the outlook for monetary policy. Although there’s speculation that the central bank head will hint at another round of quantitative easing, we see a very slim chance for QE3 given the dissent views within the Federal Open Market Committee. In turn, we expect Mr. Bernanke to elaborate of the details of the recent decision announced by the committee, and the lack of assurance for additional monetary stimulus is likely to bear down on market sentiment as the Fed continues to endorse a wait-and-see approach. Should the comments spur a flight to safety, currency traders may flood into the reserve currency, and the U.S. dollar may recoup the losses from earlier this month as it benefits from safe-haven flows.

All four components weakened against the greenback on Wednesday, led by a 0.73% decline in the British Pound, and the sterling may face additional headwinds over the near-term as market participants speculate the Bank of England to expand its asset purchase program beyond the GBP200B target. As the U.K. faces a slowing recovery, the BoE may see an increased risk of the economy falling back into a recession, and the central bank may show an increased willingness to expand monetary policy further as Governor Mervyn King sees a risk of undershooting the 2% target for inflation. In turn, the GBP/USD may continue to give back the advance from earlier this month, and the exchange rate may trade within a broad range as the fundamental outlook for Britain remains clouded with high uncertainty.