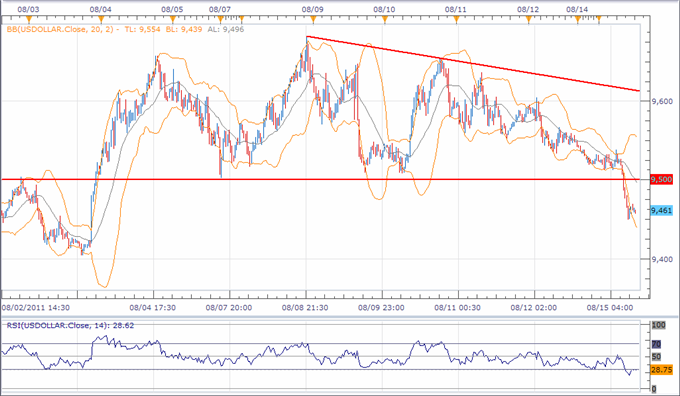 The U.S. dollar lost ground for the third day, with the Dow Jones-FXCM U.S. dollar index (Ticker: USDollar) slipping to a low of 9451.26, and the greenback may face headwinds throughout the North American trade as investors increase their appetite for yields. The USD is 0.88% lower from the open after moving 92% of its average true range, and the bearish breakout from the descending triangle may gather pace as market participants diversify away from the reserve currency. However, we should see a correction unfold over the next 24-hours of trading once the 30-minute relative strength index bounce back from oversold territory and the index may work its way back towards the 9500.00 level as price action crosses back above the lower bounds of the Bollinger Band. In light of the recent developments, 9500.00 may play as new resistance in the days ahead, and the index may threaten the rebound from 9322.00 as the Fed keeps the door open to expand monetary policy further. 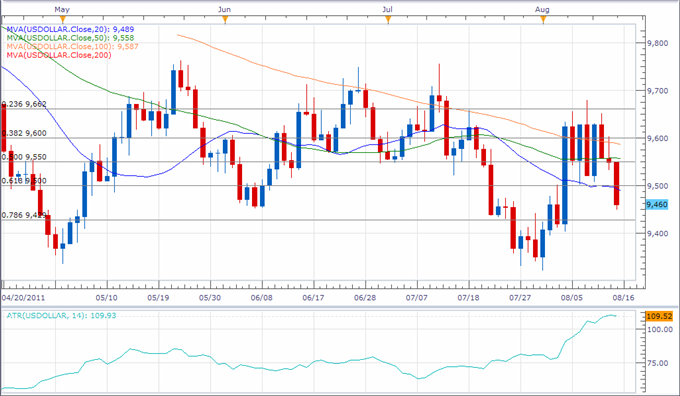 With Fed policy makers scheduled to speak later this week, we are likely to hear dissenting views amongst the officials, and we may see a growing shift within the central bank as the economic outlook remains clouded with high uncertainty. As the FOMC tries to stimulate the ailing economy, the heighten risk for inflation could spark increased opposition within the committee, and the central bank may keep the door open to expand its balance sheet further in an effort to combat the slowing recovery. In turn, the U.S. dollar index may consolidate further in the days ahead, and the break below the 20-Day SMA (9489.00) exposes the 78.6% Fib around 9429.00.

Three of the four components advanced against the greenback on Monday, carried by the 1.41% rally in the Euro, but the single-currency may come under pressure over the next 24-hours of trading as the economic docket is expected to show a slowing recovery in Europe. Economic activity in the euro-area is expected to increase 0.3% in the second-quarter following the 0.8% during the first-three months of the year, and a soft GDP report could spark a bearish reaction in the EUR/USD as the fundamental outlook for the region turns bleak. As the governments operating under the fixed-exchange rate system take extraordinary steps to balance the budget deficit, the tough austerity measures are likely to impede on the economic recovery, and the European Central Bank may continue to soften its hawkish rhetoric for monetary policy as the slowdown in growth dampens the prospects for higher inflation. In turn, the ECB may preserve its wait-and-see approach throughout the remainder of the year, and the Governing Council may have little choice but to carry its nonconventional tools into the following year given the ongoing turmoil within the financial system.