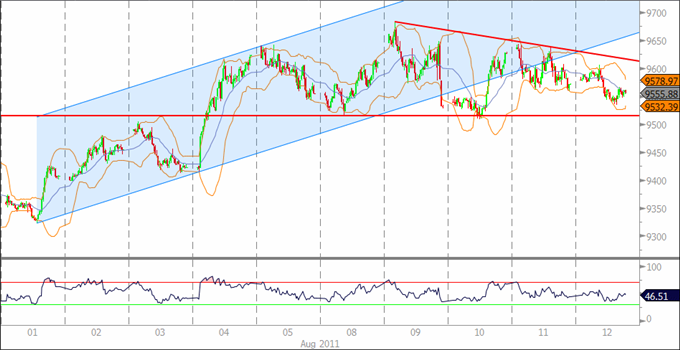 The U.S. dollar struggled to hold its ground during the North American trade, with the Dow Jones-FXCM U.S. dollar index (Ticker: USDollar) slipping to a low of 9533.81, and the greenback may continue to give back the advance from earlier this week as market participants increase their appetite for risk. The USD is now 0.16% lower from the open after moving 77% of its average true range, and the lack of momentum to push back above the 20 SMA (9560.10) could push the index back towards 9500.00. However, may see the gauge trend sideways as the Bollinger Bands hold within the descending triangle, but a bearish breakout remains on the horizon as the price action approaches the apex. 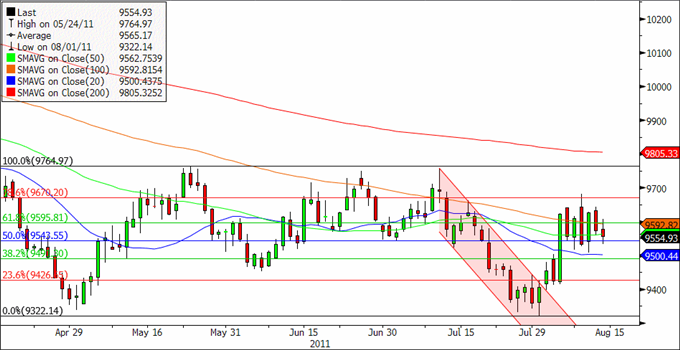 As the economic docket for early next week remains fairly light, risk trends should continue to dictate price action in the days ahead, and the rebound in market sentiment could open the door for a test of the 20-Day SMA at 9500.62. With Fed policy makers scheduled to speak next week, we are likely to see dissenting views amongst the group, and market participants may show an increased reaction to the statements as the central bank pledges to retain its zero interest rate policy well into 2013. However, recent comments from Minneapolis Fed President Narayana Kocherlakota suggests that there will be a growing opposition against expanding monetary policy further, and we may hear central bank hawk Richard Fisher hold a similar tone next week as he dissents against the majority.

Two of the four components advanced against the greenback, led by a 0.28% rally in the British Pound, but the advance could be short-lived as the Bank of England meetings minutes take center stage. As the government pledges to carry out its budget-cutting measures, the central bank may reproduce a weakened outlook for the economy, and we may see a growing shift within the MPC as the region faces a slowing recovery. As growth and inflation cool, the BOE may preserve its current policy throughout the remainder of the year, and the committee may show an increased willingness to expand the asset purchase program beyond the GBP 200B target in order to stimulate the ailing economy. Should we see an increased push to ease monetary policy further, the GBP/USD could fall back towards the 200-Day SMA at 1.6089, and the pair may threaten the rebound from 1.5781 as interest rate expectations falter.