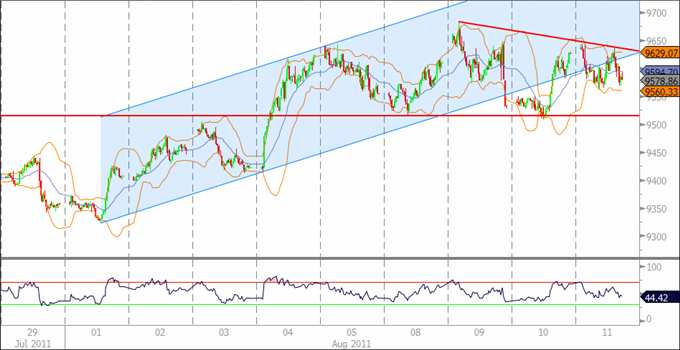 The U.S. dollar pared the advance from the previous day, with the Down Jones-FXCM index (Ticker: USDollar) falling back to a low of 9560.60, and the reserve currency may continue to consolidate over the next 24-hours of trading as price action maintains the broad range from earlier this week. The USD is 0.49% lower from the open after moving 87% of its average true range and the index looks poised to work its way back towards 9500.00 as it trades within a descending triangle. As risk flows back into the currency market, demands for the reserve currency may taper off going into the end of the week, and the rebound in trader sentiment may gather pace as the economic docket is expected to reinforce an improved outlook for future growth. Should the bearish pattern continue to pan out, we could see a sharp break to the downside as price action approaches the apex. 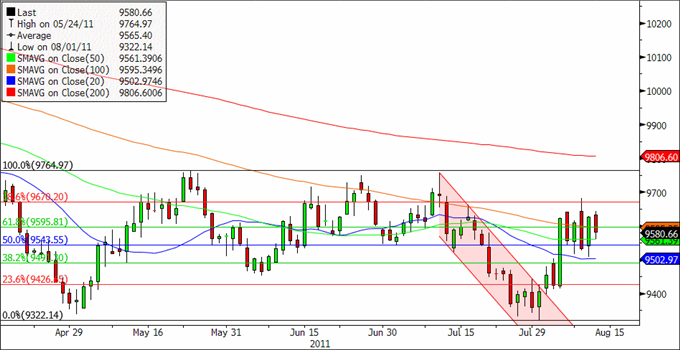 The economic docket for Friday is expected to show retail spending in the world’s largest economy increasing another 0.5% in July following the 0.1% expansion in the previous month, and the faster pace of consumption could fuel risk appetite as growth prospects improve. As risk sentiment continues to drive price action in the foreign exchange market, the data could produce a bearish reaction in the USD, and a break below the 50-Day moving average (9561.39) could expose the 20-Day SMA at 9502.97. The recent developments suggests that the greenback has carved out a near-term top in August, and the reserve currency may trade within an even broader range going forward as it gives back the rebound from 9322.14.

All four components advanced against the greenback, led by a 0.95% advance in the Australian dollar, but the rebound in the high-yielding currency could be short-lived as market participants speculate the Reserve Bank of Australia to lower the benchmark interest rate from 4.75%. According to Credit Suisse overnight index swaps, market participants see borrowing costs in the isle-nation falling by nearly 150bp over the next 12-months, and the RBA may abandon the mildly restrictive policy as growth and inflation falter. As rate expectations deteriorate, the reversal from the record-high (1.1078) looks poised to gather pace, and the AUD/USD may make another run at the 38.2% Fibonacci from the 2010 low to the 2011 high around 0.9900-30.