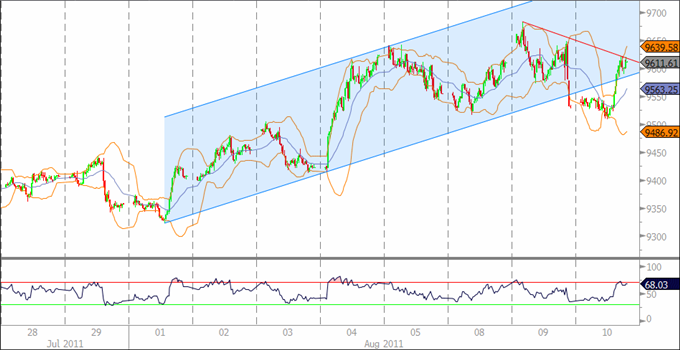 The greenback regained its footing on Wednesday, with the Down Jones-FXCM U.S. Dollar index advancing to 9621.32, and the reserve currency may continue to recoup the losses following the FOMC rate decision as it benefits from safe-haven flows. The USD is 0.85% higher on the day after moving 122% of its average true range, but we could be seeing a material shift in the greenback as price action breaks out of the upward trending channel. As the 30-minute relative strength index falls back from overbought territory, the downturn in the oscillator certainly points to a near-term correction, and the index may fall back towards the lower bounds of the Bollinger Band around 9482.08. However, should market participants continue to scale back their appetite for yields, the drop in market sentiment will certainly help to prop up the greenback as risk trends dictate price action in the foreign exchange market. 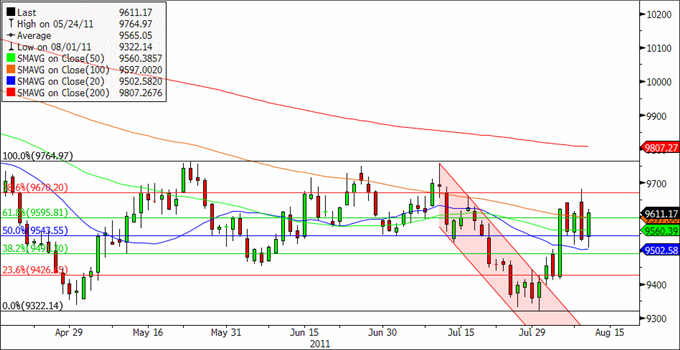 In light of the recent comments by the FOMC, Chairman Ben Bernanke’s August 26 speech at Jackson Hole will come into focus as investors raise bets for another round of quantitative easing. As the Fed plans to carry its zero interest rate policy well into 2013, the move highlights a growing risk of a double-dip recession, and the central bank may weigh alternative measures to stimulate the world’s largest economy given the slowing recovery. Until we get more comments from the central bank head, we may see the dollar index consolidate in the days ahead, but the greenback may threaten the rebound from 9322.14 should Mr. Bernanke show an increased willingness to expand the Fed’s balance sheet further.

Three of the four components weakened against the greenback on Wednesday, led by a 1.38% decline in the euro, and the single-currency remains at risk of facing additional headwinds as policy makers struggle to contain the sovereign debt crisis. Indeed, Fitch Ratings lowered its credit rating for Cyprus, and the EU could be forced to increase the scope of the European Financial Stability Facility in order to stem the heightening risk for contagion. At the same time, the European Central Bank may increase its participation in the bond market, and the Governing Council may show an increased willingness to keep the benchmark interest rate on hold for the remainder of the year as the region faces a slowing recovery. As the EUR/USD continues to trade within a bearish pattern, the near-term rebound in the exchange rate is likely to be short-lived, and the euro-dollar may threaten the rebound from 1.3638 as rate expectations falter.