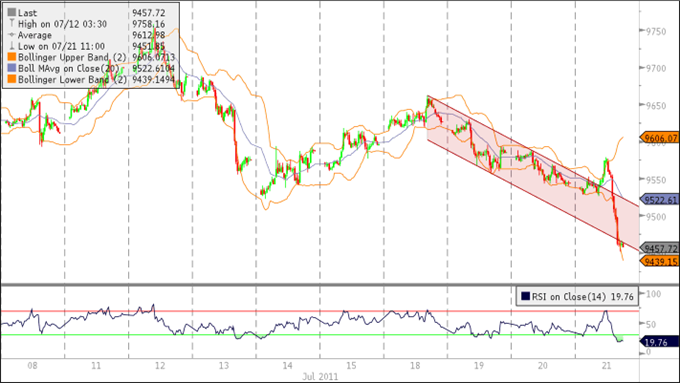 U.S. Dollar Comes Up Against Support, Euro Rally Could Be Short-Live

The Dow Jones-FXCM U.S. Dollar index tumbled to a fresh monthly low of 9457.89, and the reserve currency may struggle to hold its ground throughout the North American trade as investors raise their appetite for yields. The USD remains 0.81% lower from the open after moving a whopping 171% of its average true range, and the index may continue to pare the rebound from June (9452.35) as the 30-minute relative strength index trades deep within oversold territory. However, as the RSI bounces back from a low of 17, we could see a small correction over the next 24-hours of trading once the oscillator crosses back above 30, and the U.S. dollar index may trend sideways over the near-term as the gauge maintains the broad range from earlier this year. 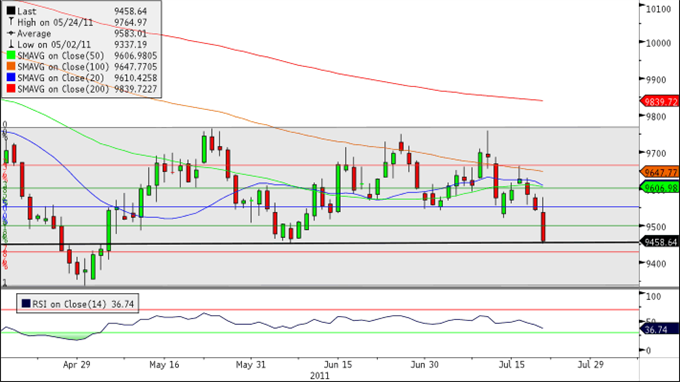 As the U.S. dollar index comes up against support around 9450.00, the greenback may trend sideways over the near-term, and we should see a correction unfold in the days ahead as long as the rebound from 9457.89 gather pace heading into the end of the week. However, a break to the downside is likely to expose the 2011 low 9337.19, and risk sentiment is likely to drive the USD over the next 24-hours of trading as the economic docket remains fairly light for the remainder of the week. As U.S. policy makers struggle to meet on ground in raising the debt ceiling, the heightening risk for a default may continue to dampen the appeal of the reserve currency, and the greenback may continue to trade heavy over the near-term as the fundamental outlook for the world’s largest economy remains clouded with uncertainties.

All four components continued to gain ground against the dollar on Thursday, led by a 1.19% rally in the Euro, and the single-currency may continue to retrace the decline from the previous month as European policy makers pledge to take additional steps to stem the risk for contagion. As the EU pushes their differences aside, the group is expected to extend the maturities on the rescue package for Greece, while lowering the yield tied to the loans to around 3.5% in order to help the region get its public finances back in order. At the same time, there’s talks that the European Financial Stability Facility will be empowered with the ability to purchase government debt in the secondary market, and the additional measures taken by the group should help to restore investor confidence even as a Greek default is expected to last for a few days. However, as the EUR/USD continues to trade below the 78.6% Fibonacci retracement from the 2009 high to the 2010 low around 1.4440-60, the downward trend from earlier this year still remains intact, and the relief rally in the euro-dollar may taper off in the days ahead as there remains high uncertainties surrounding the region.