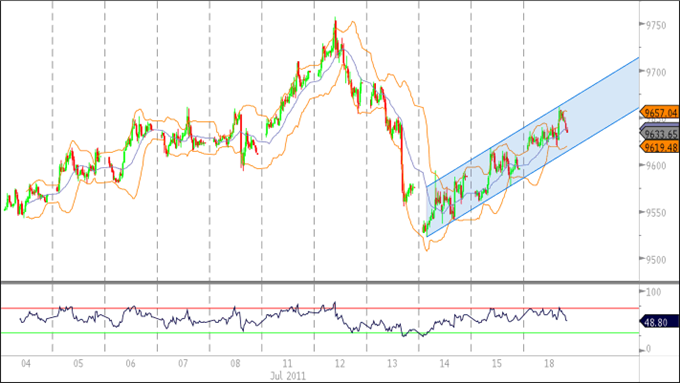 The greenback continued to gain ground on Monday, with the Dow Jones-FXCM U.S. Dollar index advancing to 9661.96, and the reserve currency may appreciate further during the North American trade as market participants scale back their appetite for yields. The USD remains 0.40% higher on the day after moving 68% of its average true range, and risk sentiment is likely to dictate price action heading into Tuesday as the economic docket remains fairly light for the next 24-hours of trading. As U.S. officials increase their efforts to strike a deal in raising the debt ceiling, fears of a default should subside, and the rebound in the reserve currency are likely to gather pace over the near-term as market participants turn their focus to the heightening risk for contagion in Europe. As the index appears to be trading within a fresh upward trending channel, the USD should continue to retrace the decline from earlier this month, but we could see a small correction unfold in the overnight trade as the 30-minute relative strength index galls back from overbought territory. 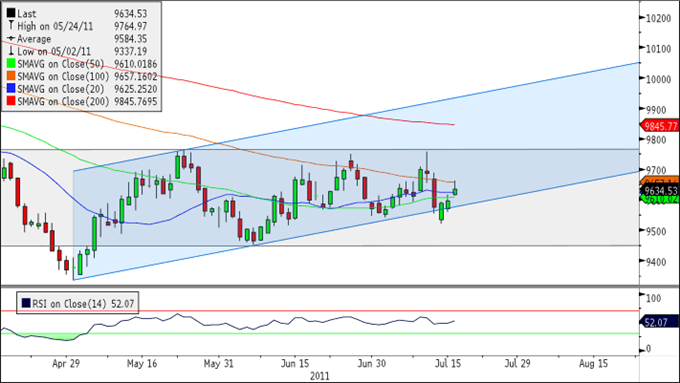 As USD trades back inside the upward trending channel from earlier this year, the dip to 9522.16 appears to have been a false breakout, and the index may make another run at 9800.00 as the reserve currency benefits from safe-haven flows. Nevertheless, all eyes will certainly be on the EU summit scheduled for July 21 as the group aims to draw up a second bailout package for Greece, but the record-high financing costs faced by the European periphery may continue to bear down on trader sentiment as the risk for contagion intensifies. As policy makers struggle to address the sovereign debt crisis, we are likely to see the European Central Bank continue to soften its hawkish tone for monetary policy, and the Governing Council may have little choice but to delay its exit strategy further as region’s financial system remains under stress.

Three of the four components weakened against the greenback on Monday, led by a 0.59% decline in the British Pound, and the sterling may face additional headwinds later this week as the Bank of England is widely expected to endorse its wait-and-see approach for the second-half of 2011. With the BoE scheduled to release the policy meeting minutes later this week, the statement could show a growing shift within the MPC, and the committee may see a growing case to increase its asset purchase target beyond GBP 200B as the U.K. faces a slowing recovery. Fresh comments for the central bank is likely to heavily influence the GBP/USD as investors weigh the outlook for future policy, and the sterling could face additional headwinds over the near-term should an increased number of the MPC vote to expand monetary policy further. Despite the dissenting views within the committee, Moody’s anticipates the BoE to deliver a 25bp rate hike by the end of this year, and interest rate expectations may gather pace over the coming months as the rating agency sees borrowing costs increasing by 100bp in 2012.