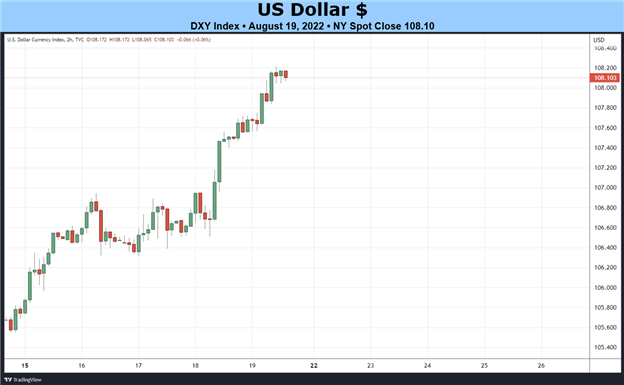 The US Dollar (via the DXY Index) posted its best week of 2022 last week, gaining +2.3% to finish at its highest weekly close of the year. The question is how much of the rally was due to USD-centric reasons, and the answer, in short, is only some: a small but meaningful rise in the US 2-year yield; a bump in volatility by the end of the week; and a continued rebound in Fed rate hike odds.

But the main source of US Dollar strength was weakness abroad: the three largest components of the DXY Index, the British Pound, the Euro, and the Japanese Yen, are contending with their own problems that makes the US Dollar, as the saying goes, ‘the nicest house in a bad neighborhood.’ EUR/USD rates fell by -2.13%, GBP/USD rates dropped by -2.54%, and USD/JPY rates added +2.54%. The onus for more USD strength in the days ahead falls squarely on the shoulders of the Federal Reserve, however.

US Economic Data Still Matters, But…

After a lighter US economic calendar through the middle of the month, the docket is once again saturated with around a dozen ‘medium’ and ‘high’ rated events. And while the data releases matter, the simple fact of the matter is that they will likely take a back seat to the Fed’s Jackson Hole Economic Policy Symposium, particularly Fed Chair Jerome Powell’s speech on Friday. 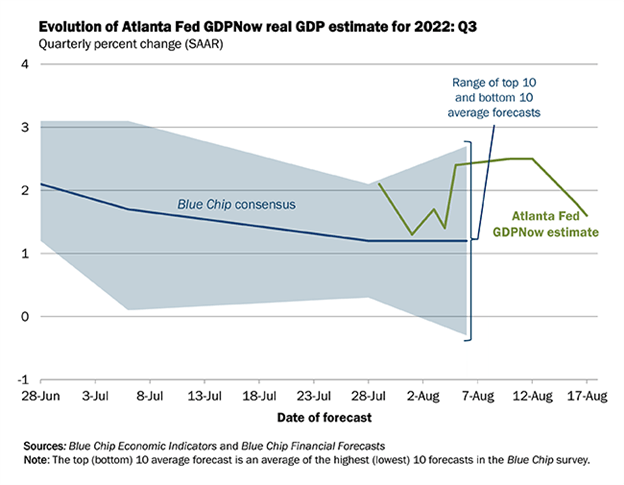 Based on the data received thus far about 3Q’22, the Atlanta Fed GDPNow growth forecast is now at +1.7% annualized based on data available through August 17. The downgrade was a result of “the nowcast of third-quarter real personal consumption expenditures growth [decreasing] from +2.7% to +2.4%.”

Rate Hikes Creeping Back In

We can measure whether a Fed rate hike is being priced-in using Eurodollar contracts by examining the difference in borrowing costs for commercial banks over a specific time horizon in the future. Chart 1 below showcases the difference in borrowing costs – the spread – for the front month/August 2022 and December 2022 contracts, in order to gauge where interest rates are headed by the end of this year. 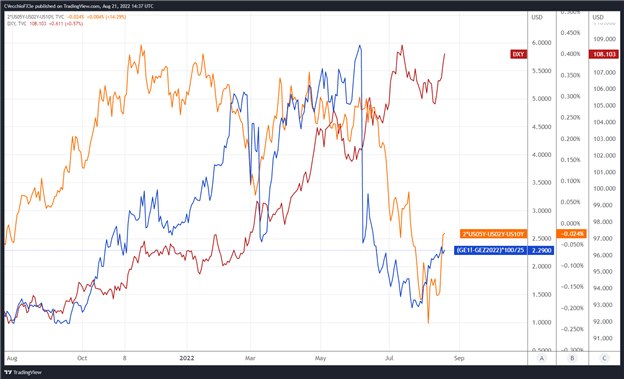 The past several weeks have seen Fed rate hike odds rise. On August 1, there was one 25-bps rate hike priced-in through the end of 2022, with a 34% chance of a second 25-bps rate hike (50-bps in total by the end of the year). Now, 50-bps worth of rate hikes are fully discounted, with a 29% chance of a third 25-bps rate hike. Alongside a steeper 2s5s10s butterfly, the market is evidently listening to the Fed as multiple policymakers have insisted that the rate hike cycle isn’t finished. The perception of a relatively more hawkish Fed is helping undergird the US Dollar’s recent rebound. 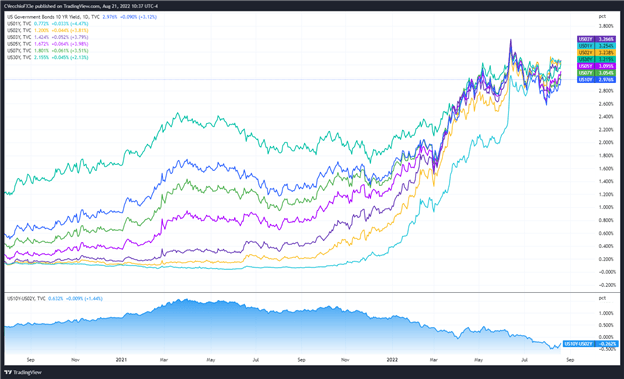 The shape of the US Treasury yield curve – inverted, but less so than in recent weeks – alongside rising Fed rate hike odds is proving a tailwind for the US Dollar. US real rates (nominal less inflation expectations) have started to rise again, reinforcing the rally. The thrust of Fed rate hike expectations is weaker than it was earlier this year, suggesting that much of recent US Dollar strength is about perceived problems abroad, particularly for the British Pound and the Euro. 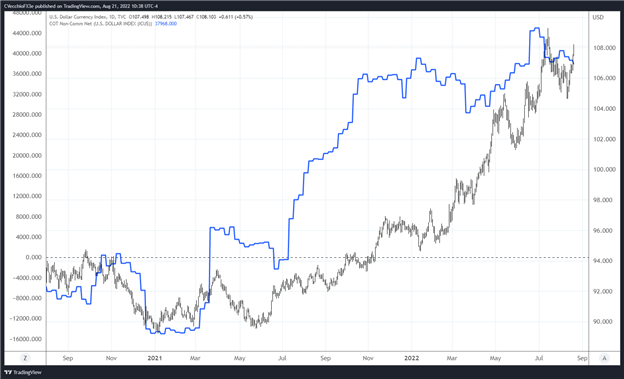 Finally, looking at positioning, according to the CFTC’s COT for the week ended August 16, speculators increased their net-long US Dollar positions to 37,968 contracts from 38,635 contracts. Despite moderation in recent weeks, US Dollar positioning is still oversaturated, holding near its most net-long level since March 2017.