The US Dollar underperformed this past week, with the DXY Index falling about 1.3% over the past 5 trading sessions. This was the worst performance since the end of January. Could this be the start of a broader reversal in the Greenback? That seems unlikely at this time, but there are a couple of reasons why the currency weakened.

For starters, some profit-taking might have been a factor. Leading to the US Dollar’s decline, the currency was on a 6-week winning streak. That was the most since November. But, this probably won’t be a major contributor to a broader turning point in the currency. What is more worrying is that it seems the markets are starting to get increasingly concerned about a US recession.

On the chart below, the markets have been gradually paring back 2023 Federal Reserve rate hike expectations as the S&P 500 declined. Due to its status as the global reserve currency, volatility in stock markets has likely been benefitting the Greenback. But, for the most part, Treasury yields were rising as the central bank adopted a more hawkish stance. The latter also benefited the currency.

Now, those same government bond yields are starting to level off. The past two weeks have seen the 10-year rate weaken by over 11%, the worst 2-week performance since late November. It should be noted that this weakness also reflects higher demand for safety as traders bid up the price of bonds, pushing down the yields.

Still, next week could revive some life back into the US Dollar. All eyes are on the FOMC meeting minutes, where the document will reveal further details about this month’s 50-bases point rate hike. A hawkish tone coupled with confidence in the economy could bolster tightening bets. On Friday, the central bank’s preferred inflation gauge, the PCE core deflator, will cross the wires.

The latter is expected at 4.9% y/y in April from 5.2% prior. But, like the recent headline CPI report for the same month, a higher-than-expected outcome could further fuel hawkish policy expectations. That may also bring up stock market volatility. As such, despite recent weakness in the US Dollar, it will likely take much more to offer a meaningful turnaround in the Greenback. 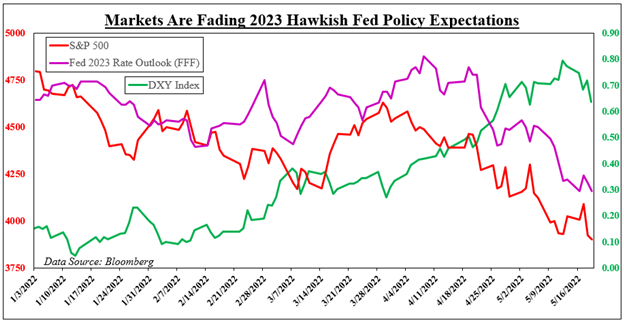