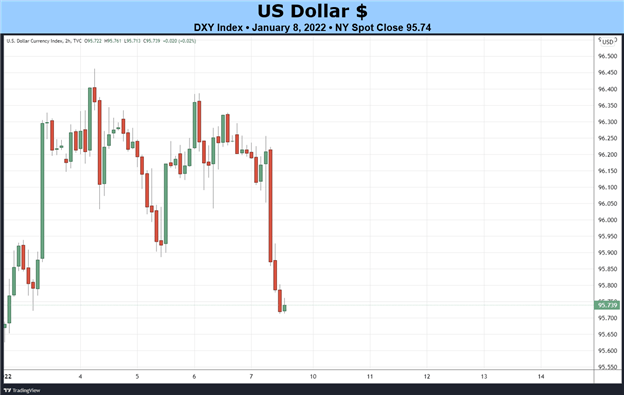 The first week of the year proved to be disappointing for the US Dollar. While the DXY Index added +0.07%, most of its gains were given back by the end of the week following the middling December US jobs report. EUR/USD rates finished lower by -0.20%, while USD/JPY rates added +0.33%. With risk appetite fading, high beta pairs like AUD/USD and NZD/USD fell back by -1.24% and -1.07%, respectively. GBP/USD rates bucked the trend, gaining +0.39%.

US Economic Calendar in Focus

With the holidays official in the rearview mirror, the turn into the second week of January brings about a supersaturated US economic docket. Not only are there several ‘high’ ranked data releases due in the coming days, there are testimonies and speeches by several Federal Reserve policymakers that seem destined to introduce more volatility to financial markets in the wake of the December Fed meeting minutes. 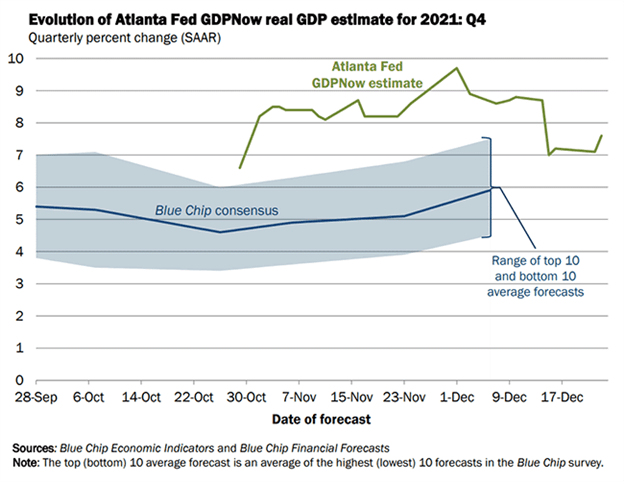 Based on the data received thus far about 4Q’21, the Atlanta Fed GDPNow growth forecast is now at +6.7% annualized, down from +7.4% on January 4. “Recent releases from the US Bureau of Economic Analysis, the US Census Bureau, and the Institute for Supply Management” have weighed down US growth expectations as the COVID-19 omicron variant infection rate has surged in recent weeks.

The next update to the 4Q’21 Atlanta Fed GDPNow growth forecast is due on Monday, January 10 after November US wholesale inventories data are released.

We can measure whether a Fed rate hike is being priced-in using Eurodollar contracts by examining the difference in borrowing costs for commercial banks over a specific time horizon in the future. Chart 2 below showcases the difference in borrowing costs – the spread – for the January 2022 and December 2023 contracts, in order to gauge where interest rates are headed by December 2023. 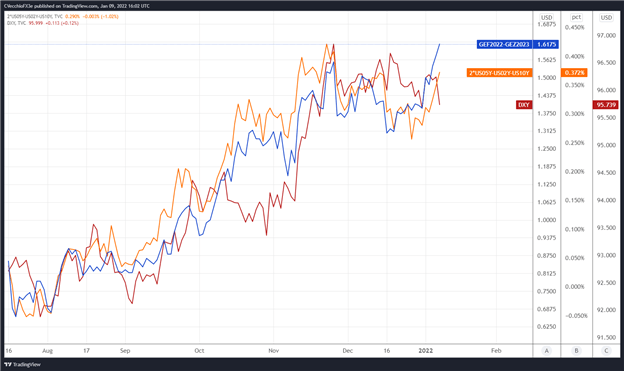 There are 161.75-bps of rate hikes discounted through the end of 2023 while the 2s5s10s butterfly is just off of its widest spread since the Fed taper talk began in June (and its widest spread of all of 2021). After the December Fed meeting minutes and December US NFP report, rates markets are effectively pricing in a 100% chance of six 25-bps rate hikes and a 47% chance of seven 25-bps rate hikes through the end of next year – the most aggressive Fed rate pricing seen during the pandemic thus far. 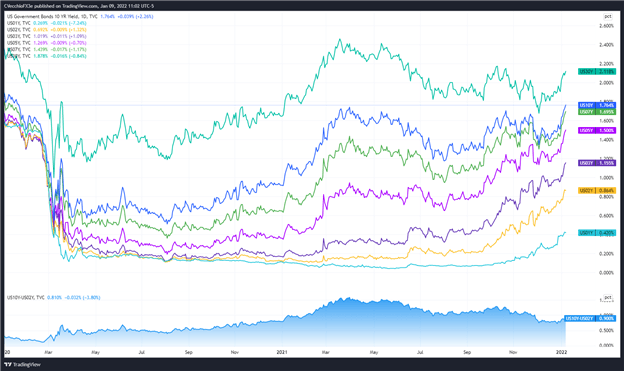 Historically speaking, the combined impact of rising US Treasury yields – particularly as intermediate rates outpace short-end and long-end rates – alongside elevated Fed rate hike odds has produced a favorable trading environment for the US Dollar. 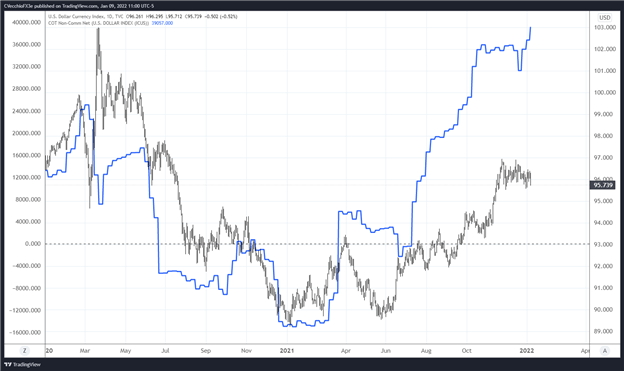 Finally, looking at positioning, according to the CFTC’s COT for the week ended December 7, speculators decreased their net-long US Dollar positions to 39,057 contracts from 36,775 contracts. Net-long US Dollar positioning continues to hold near its highest level since October 2019, when the DXY Index was trading above 98.00. Failure by the DXY Index to push higher despite rising US Treasury yields and increasing Fed rate hike odds may be symptomatic of an oversaturated futures market.