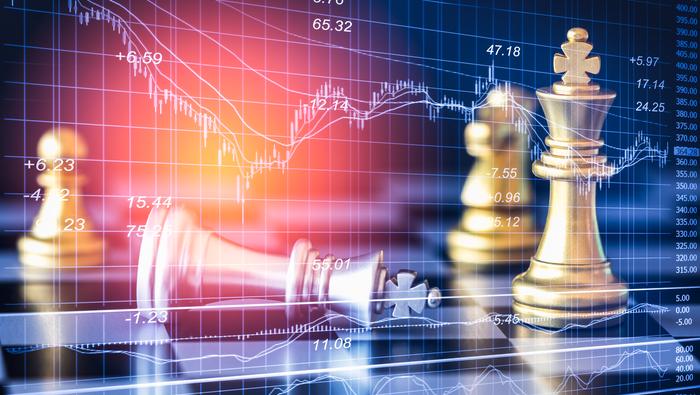 US Dollar selling pressure prevailed last week and left the DXY Index -0.3% lower on balance. The US Dollar weakened across most major currency pairs including EUR/USD, USD/JPY, GBP/USD, and USD/CAD. This likely followed the decline in ten-year Treasury yields, which occurred in spite of Fed taper talks growing more heated amongst market participants.

Federal Reserve officials are doing their best to stay patiently accommodative and let inflation overshoot the central bank’s 2% target in the near term, labeling it as transitory and in alignment with its recent shift to average inflation targeting (AIT). Although, it is prudent to remember that the market has a mind of its own and is apt to price in (i.e. front-run) potential Fed policy changes.

This has already led to occasional bursts of US Dollar strength. With USD bears arguing that the Fed’s pursuit of making “further substantial progress” warrants the commitment to a dovish stance, however, these waves of US Dollar demand have been faded and short-lived.The ongoing tug-of-war match between US Dollar bulls and bears has strongarmed the DXY Index -4% lower from its 31 March swing high, but considering subtle hints that the Fed has already started to discuss the idea of tapering, there could be potential for the Greenback to find support around current levels. 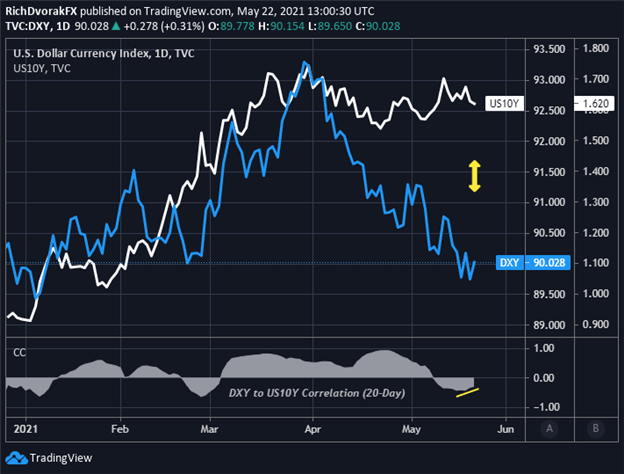 FOMC minutes noted, for example, how “a number of participants suggested that if the economy continued to make rapid progress toward the Committee’s goals, it might be appropriate at some point in upcoming meetings to begin discussing a plan for adjusting the pace of asset purchases.” It is worth emphasizing that the latest batch of FOMC minutes are from the April 2021 Fed meeting, which preceded the release scorching red-hot CPI data and flash PMIsthat highlighted an “unprecedented expansion” for economic activity across the US.

Not to mention, while nonfarm payrolls may have missed forecast on the headline jobs figure, wage inflation accelerated quicker than expected. Markets thus might place greater weight on upcoming economic data releases for ammunition to sway the Fed taper debate going forward. In turn, US Dollar traders may want to consider keeping close tabs on any corresponding Treasury yield volatility. I will be watching out for ten-year Treasury yields potentially breaking out above 170-basis points as this could catalyze a sharp reversal higher by the broader US Dollar.

If this materializes, it would likely reflect the market pricing increased risk of Fed tapering amid mounting evidence of robust economic activity and not-so transient price pressures. On the other hand, if ten-year Treasury bond yields stay relatively subdued or head lower due to persistent Fed jawboning, it is possible that the US Dollar continues to weaken broadly. The correlation between the DXY Index and yields on ten-year Treasury bonds provides additional insight on this relationship.

USD price action, generally speaking, tends to closely track the direction of ten-year Treasury yields as illustrated on the chart above. This link between Treasury yields and the US Dollar has deteriorated recently gauging by the negative 20-day correlation coefficient, but that might not last long. The gap formed likely stands to converge (i.e. close) as the two assets start to move in unison again and their correlation reverts to its historically positive nature. That all said, I think potential for Treasuries to ‘lead the way’ is notable with risk skewed to the upside for both yields and US Dollar outlook. A breakdown in ten-year Treasury yields below 1.5% could justify recalibrating this bias.