Weekly US Dollar Fundamental Forecast: Down, But Not Out US Dollar Rounding the Turn

The US Dollar (via the DXY Index) broke its 2020 lows during the first trading week of 2021, and yet, the broad greenback gauge still managed to finish the week higher. While the +0.19% gain for the DXY Index seems meager, it coincides with a break of the November-December 2020 downtrend amid the worst US jobs report since April. US Dollar resiliency in the face of otherwise bad news – weak US labor market data implicitly boosts odds for more stimulus, fiscal or monetary – simply can’t be dismissed. Even if the longer-term view for the US Dollar remains bearish, the near-term environment may cater to more gains in the coming sessions.

US Economic Calendar Gets Busier

The economic calendar during the second week of January will provide some key insights into the US economy, which appears to have backtracked in November and December. Coupled with five speeches from Federal Reserve policymakers, including one from Fed Chair Jerome Powell, it’s likely that the US Dollar sees several instances of heightened event risk over the course of the week. For the Fed speakers, we’re watching to see if their comments further instigate taper tantrum concerns (see more below).

First, the December US inflation report on Wednesday is expected to show a mixed picture, with some measures of price pressures falling while others are set to rise; but without any expected swings greater than +/-0.1%, and yearly readings set to stay below +2%, there may not be significant price action thereafter. Second, the December US retail sales report on Friday is likely to mirror the weakness seen in the December US jobs report, with a third consecutive month of contracting sales anticipated.

For full data forecasts as well as time and dates for Fed speechs, view the DailyFX economic calendar. 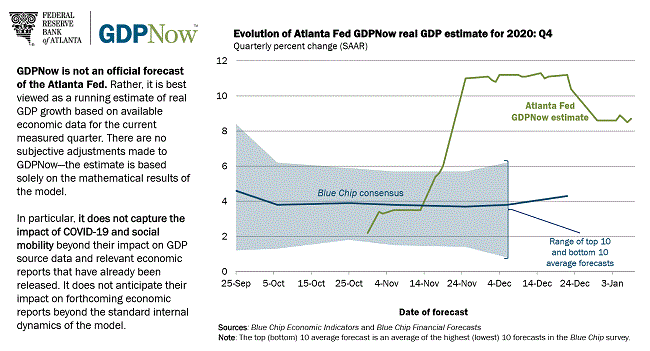 Based on the data received thus far about Q4’20, the Atlanta Fed GDPNow forecast is looking for growth at +8.7% annualized. But the estimate has fallen in recent weeks, from a peak north of +11% in mid-December; there are been a significant deceleration in growth expectations. Meanwhile, the Blue Chip estimate has been much more dour, projecting between a +4-5% annualized growth rate for the past several weeks. The next Q4’20 Atlanta Fed GDPNow forecast will be released on Friday, January 15. 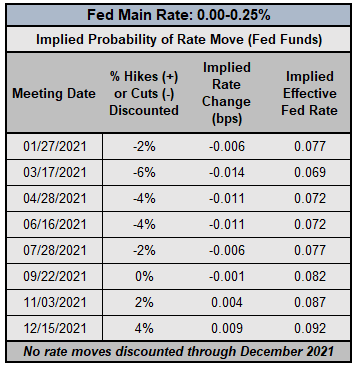 The Federal Reserve has been clear in its intent to keep its main rate low through 2023. But talk in recent days among Fed policymakers have brought forth some early concerns about tapering of the bond buying program, in effect a discussion about the timetable for ending quantitative easing. Fed funds futures are responding slowly, with odds of a rate hike in 2021 rising to 4% from 0% over the course of the week.

Fears of another ‘taper tantrum’ a la 2013 have started to wake up, with long-end US Treasury yields rising (notably, the 10-year yield moving back above 1%). Although Fed policymakers won’t be moving on interest rates in an official capacity, we’ll see if this week’s coming slate of Fed speeches produce more early taper tantrum-like reactions across the curve. 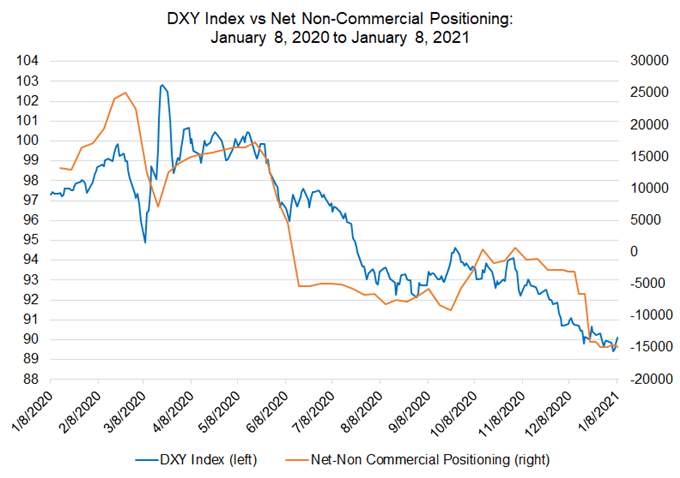 Finally, looking at positioning, according to the CFTC’s COT for the week ended January 5, speculators held slightly increased their net-short US Dollar positions to 14,952 contracts, up from 14,557 contracts held in the week prior. Net-short US Dollar positioning has been relatively stable since the third week of December, not a surprise given the low trading volumes and general illiquid conditions seen during the Christmas-New Year’s interlude. Some evidence of short covering will likely be found in the forthcoming January 12 report.