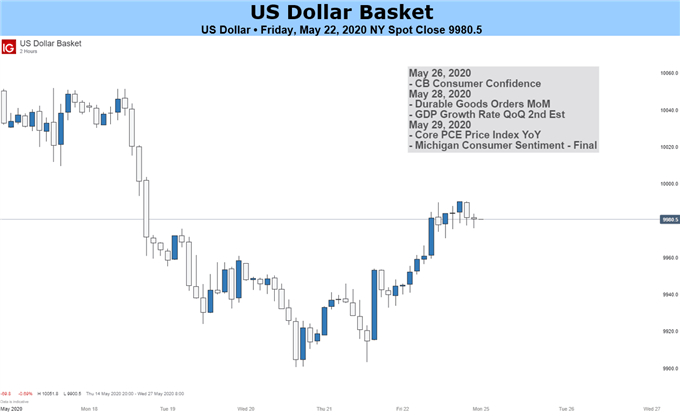 The haven-linked US Dollar encountered aggressive selling pressure after the Dow Jones Industrial Average and global equities bottomed in late March. Since then, gains in equities have notably slowed with US benchmark stock indexes, for the most part, trading flat since the end of April. It is then understandable to have seen weakness in the US Dollar slow since then.

A reason behind this dynamic in financial markets, particularly as over 38 million US citizens filed for unemployment thus far, could be the diminishing momentum from the Federal Reserve efforts to stimulate the economy. While the central bank’s balance sheet swelled to over US$7 trillion last week, growth in it has been noticeably unwinding – see immediate chart below. 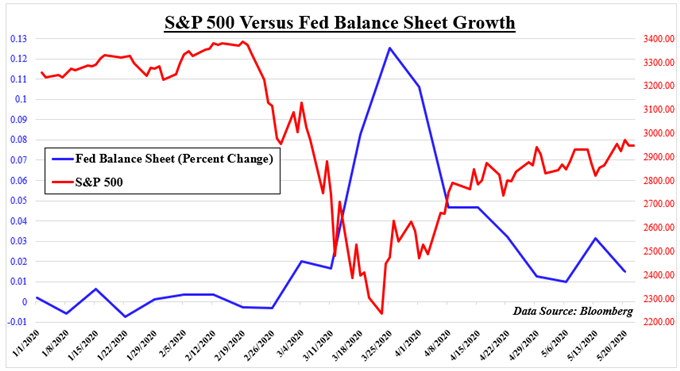 US-China Tensions, the Risk of Escalation

With that in mind and as equities struggle to pick up momentum, there is a chance that the US Dollar could see buying pressure should sentiment reverse course. While the coronavirus outbreak and nations gradually easing lockdown measures are important fundamental themes, in the background trouble is brewing between the world’s largest economies.

For some time, US President Donald Trump has been expressing his discontent with China’s handling of the coronavirus outbreak. Since then, tensions between the two nations have been heating up. The US is now eyeing increased oversight over Chinese-listed stocks on local exchanges. This is as the two sides have exchanged verbal jabs between each other.

Further complicating matters is China ramping up Hong Kong security laws, sending the Hang Seng tumbling over 5.5 percent at one point Friday. Last year, violent protests over the city-state’s autonomy drew in sharp criticism from the West. These developments have been bringing back fears of resuming tensions that brought the US and China into a trade war that damaged global growth.

On the next chart below, the US Dollar can be seen appreciating alongside a global gauge of economic policy uncertainty during the heat of the US-China trade war. As such, further escalation from here risks further clouding the outlook for global growth. That may bode well for the highly-liquid US Dollar, particularly at the expense of the sentiment-linked Australian Dollar and similarly-behaving New Zealand Dollar.

Focusing on upcoming local economic event risk ahead, consumer confidence, the second estimate of first-quarter GDP and jobless claims are up. The former could be the most important piece of new information as the primary driver behind GDP is consumption. If confidence remains under pressure, depressing propensity to consume, that may further weigh on the speed of an economic recovery. If this induces risk aversion, USD may rally and vice versa. 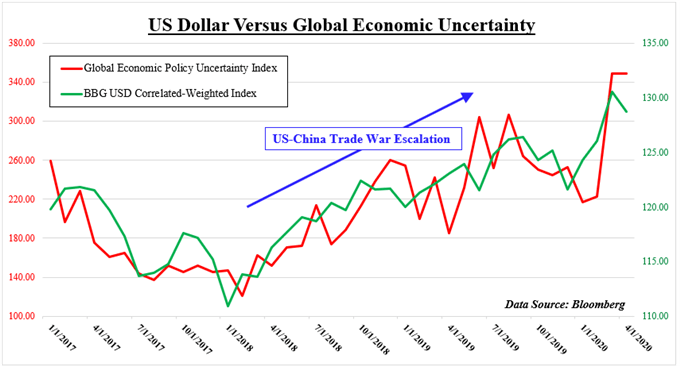